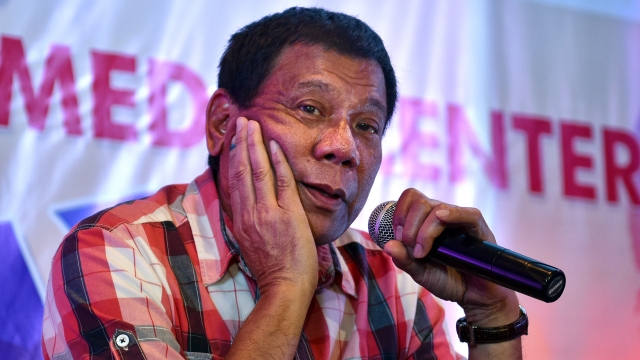 Brash Philippine President Rodrigo Duterte doesn't like what the United Nations has to say about his crackdown on criminals.

He has encouraged people to kill drug dealers and called a U.S. ambassador "gay" and a "son of a *****," but it seems Philippine President Rodrigo Duterte can't take criticism.

Wrapping up a long press conference on Sunday, Duterte reportedly threatened to leave the United Nations.

According to a translation from CNN Philippines, Duterte said: "Maybe we'll just have to decide to separate from the United Nations. ... If you are that insulting, we should just leave."

Just days earlier, U.N. experts called on Duterte and the Philippine government to put a stop to the killings of suspected criminals who haven't had their day in court.

SEE MORE: In The Philippines, Dealing With Drugs Could Be A Death Sentence

Duterte has offered rewards to people who shoot drug dealers who resist arrest or won't turn themselves in. An estimated 900 people have been killed in Duterte's crackdown.

Duterte was elected in May and sworn into office in June.

One expert said Duterte's directives "are irresponsible in the extreme and amount to incitement to violence and killing, a crime under international law."

Duterte reportedly said Sunday: "Take us out of your organization. You have done nothing anyway. When were you here last time? Nothing. Never. Except to criticize."