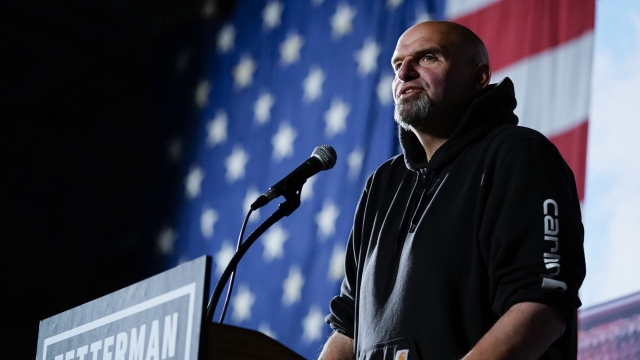 With just a month to go before Election Day, a certain pre-election fatigue has set in for some undecided voters in Pennsylvania.

"Both campaigns are so negative. I haven't heard anybody say what they're going to do," undecided voter Anna Marie said.

"It makes me wish I had run myself, but I would do it differently. I do not like the negative advertising," undecided voter Scott Kutzner said.

In Pennsylvania's race to succeed retiring Republican Sen. Pat Toomey, the Democratic candidate, Lt. Gov. John Fetterman, has long been in the lead.

"I just can't vote for Dr. Oz. He has no qualifications whatsoever, and Fetterman seems like a really solid, true Pennsylvanian," said Brian Riordan, who is voting for Fetterman.

But recent polling shows Fetterman's lead, and the number of undecided voters in the Keystone State, are shrinking.

Back in July, polls showed Fetterman with an 11-point lead over Mehmet Oz, with 11% of voters telling pollsters they were undecided.

Now, according to a late September poll by Fox News, Fetterman has a lead of as little as 4 points over Oz, and undecided voters are down to the single digits

A stroke in late May sidelined Fetterman from the campaign trail for much of the summer.

Meanwhile, Oz has faced his own controversies. Among them: allegations that he moved to Pennsylvania from his longtime home of New Jersey in order to run for office.

"I don't like Oz's policies. He's not from around here," said Barry McCowin, who is voting for Fetterman.

With polls as tight as they are, the Senate majority might run through Pennsylvania, as some voters send a message to Washington after two years of Democratic control.

"I think people, right now, haven't made their minds up. I think the closer you get to the election, there are some people who are going to decide they want to hear what he has to say," said Sharilyn White, who is voting for Oz.