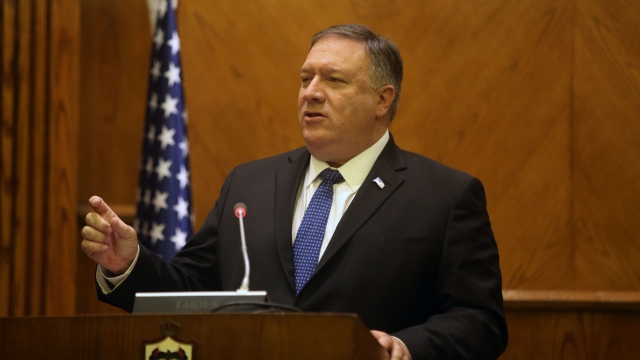 In a speech in Cairo, the secretary of state criticized the actions of the Obama administration and pledged to push back against Iran.

"The age of self-inflicted American shame is over, and so are the policies that produced so much needless suffering," Pompeo said.

In a speech in Egypt, Secretary of State Mike Pompeo strongly criticized the Obama administration's Middle East policies and laid out what the Trump administration is doing differently.

"President Trump has reversed our willful blindness to the danger of the regime and withdrew from the failing nuclear deal with its false promises," Pompeo said. "The U.S. reimposed sanctions that should never have been lifted."

He also reiterated plans to withdraw American troops from Syria. He said the U.S. is still focused on "dismantling" ISIS, but that the Trump administration will rely more on its Middle East partners.

"But 'assist' is the key phrase. We ask every peace-loving nation in the Middle East to shoulder new responsibilities to defeat Islamic extremism wherever we find it," Pompeo said.

Pompeo's comments make it seem like plans to withdraw from Syria are solidified. That runs counter to recent comments from national security adviser John Bolton, who tied the Syria withdrawal to additional conditions.

But Iran was the main target of Pompeo's speech, and the country's foreign minister was quick to push back. He wrote on Twitter that the day Iran becomes a "'normal' country is the day hell freezes over."