President Trump Refers To Impeachment Inquiry As A 'Lynching' 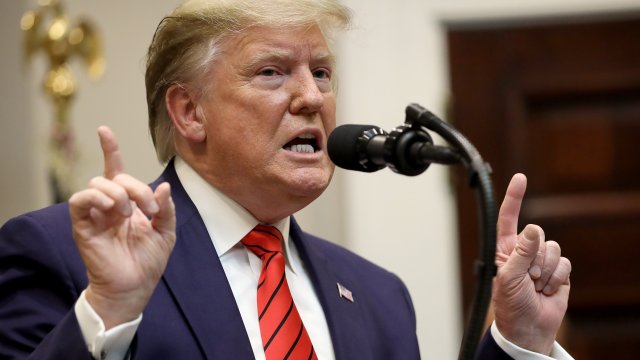 The word "lynching" is linked to the era after the Civil War when thousands of black people were terrorized, attacked and murdered, often publicly.

President Donald Trump has repeatedly criticized the impeachment inquiry against him, calling it "witch hunt" and a "fraud." But on Tuesday, the president paralleled his experience with the inquiry to a "lynching."

He tweeted: "So some day, if a Democrat becomes President and the Republicans win the House, even by a tiny margin, they can impeach the President, without due process or fairness or any legal rights. All Republicans must remember what they are witnessing here - a lynching. But we will WIN!"

He faced almost immediate backlash. "Lynching" is associated with the decades of intense racial violence in the U.S. after the end of slavery and the Civil War. Black people were terrorized, attacked and killed by hanging, and it was often done publicly. The Equal Justice Initiative, or EJI, says "racial terror lynchings were violent and public acts of torture that traumatized black people throughout the country and were largely tolerated by state and federal officials .... Lynching was targeted racial violence at the core of a systematic campaign of terror perpetuated in furtherance of an unjust social order."

Just last year, the EJI opened the National Memorial for Peace and Justice in Montgomery, Alabama. It's the U.S.' first memorial to 4,400 black lynching victims that EJI documented from 1877-1950. The organization says these acts "significantly marginalized black people in the country's political, economic, and social systems; and it fueled a massive migration of black refugees out of the South. Lynching — and other forms of racial terrorism — inflicted deep traumatic and psychological wounds on survivors, witnesses, family members, and the entire African American community."

The Congressional Black Caucus condemned President Trump's tweet; members said it would "behoove" the president to visit the National Memorial for Peace and Justice and learn about the history behind his choice of words. The caucus' chair, Rep. Karen Bass, said President Trump is "using racial rhetoric to distract from the truth — his corrupted behavior is weakening the integrity of our democracy, the dignity of the office he holds and our national security. The President's tweet is comparing a constitutional process to the prevalent and systematic brutal torture and murder of thousands, I repeat, thousands of African Americans in this country. It's unacceptable."

In an interview with CNN's Manu Raju, Bass said: "Whenever his back is against the wall, a racial bomb is what we know of him to throw."

Raju asked, "This is racist?"

Raju asked, "Why do you think?"

Bass replied: "Well, I think because he throws out race. Because he knows it's red meat, and he has done that consistently."

White House deputy press secretary Hogan Gidley responded to the backlash, saying President Trump was fair to describe the impeachment process as a "lynching." Gidley told reporters the president "is not comparing what happened to him with one of our darkest moments in American history. What he's explaining, clearly, is the way he's been treated by the media since he announced for president." Gidley added that President Trump was referring to the way Democrats have treated him, saying he is "receiving zero due process from Democrats on the Hill. That's what he's talking about."