Trump Tweeted He Has 'Complete Power To Pardon.' But Does He? 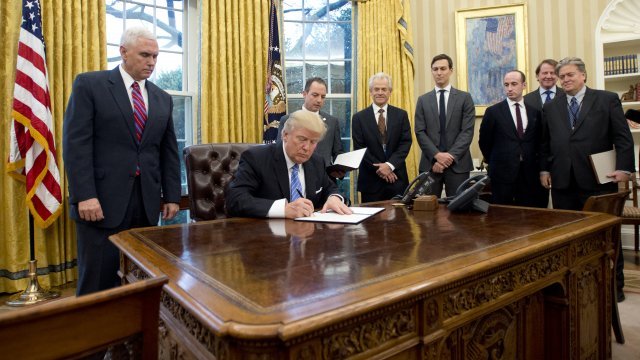 Even experts can't agree on whether or not the president can pardon himself.

In a tweet Saturday morning, President Donald Trump said he has "complete power to pardon."

His tweet appears to be a response to a Washington Post report that alleges Attorney General Jeff Sessions had campaign-related discussions with Russian Ambassador Sergey Kislyak.

After weeks of negotiations, the House and Senate are expected to vote on the Russia, Iran and North Korea Sanctions Act on Tuesday.

In another tweet, Trump wrote: "A new INTELLIGENCE LEAK from the Amazon Washington Post, this time against A.G. Jeff Sessions. These illegal leaks, like Comey's, must stop!"

It also follows a different Washington Post report that said Trump met with advisers about his "power to pardon aides, family members and even himself" in the investigation of possible collusion with Russia in Trump's campaign.

While Trump asserts that "all agree" to his absolute pardoning power, that's not actually the case. Expert opinions vary — perhaps because no president has ever attempted to pardon themselves.

According to The New York Times, the only "explicitly stated" limit to a presidential pardon is that it can't be used to stop impeachment or pardon state law offenses.

Some experts say the president can't pardon himself because it would be a conflict of interest. But, as we've noted in the past, Trump has a lot of those.

There's also the 25th Amendment route: Trump could declare himself temporarily "disabled," have Vice President Mike Pence take over his duties in order to pardon him, and then take the office back from Pence.

Trump's tweet comes as his legal team faces allegations that it's trying to undercut the Russia investigation run by Robert Mueller.

Trump's lawyers have denied those accusations, calling them "nonsense."