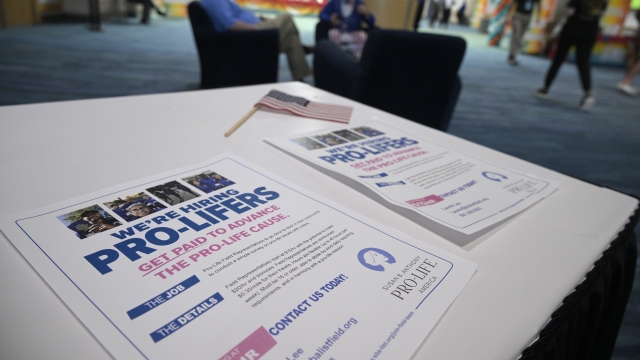 After anti-abortion measures failed in several states during the midterms, anti-abortion rights activists are analyzing what happened.

They’ve protested human rights violations in China and prayed with the church members after the Charleston massacre.

"We met with Uyghur women. We organized boycotts for the Olympics," said Rev. Patrick Mahoney, chief strategy officer for  Stanton Public Policy Center. "I've been committed to human rights, calling for racial justice, sleeping out in dumpsters, for the homeless."

Since Roe v. Wade was overturned, anti-abortion causes have been overwhelmingly rejected by voters.

"Roe v. Wade was overturned through the Dobbs decision. It was overturned in the courts. But it has not been overturned in many of our institutions and in the hearts and minds of some Americans," said Swindell, founder and CEO of Stanton International.

Some anti-abortion rights activists see the losses as a bit of a wakeup call — a sign that something needs to change.

"The pro-life movement needs to have a little bit of a revolution on this, or it will continue to lose," said Patrick Brown, a fellow at the Ethics and Public Policy Center.

According to polling from the Wall Street Journal, 60% say abortion should be legal in all or most cases. And a survey from the Kaiser Family Foundation found 82% who oppose abortion bans in the cases of rape or incest.

For Opponents Of Abortion, New State Laws A Route To Supreme Court

Abortion opponents see more restrictive laws being passed by state legislatures across U.S. are a way to push the Supreme Court to act.

"If pro-lifers can come to some agreement on what some common sense exceptions might be, I think we'll have much more success in moving the ball forward when it comes to pro-life ostracization down the road," said Brown.

"We have to acknowledge and look at it that there is a gray area when it comes to abortion. For many Americans, it's not black and white," said Swindell.

"We continue to push for engagement with pregnancy resource centers and churches to help again provide for women and show the compassionate side of this issue that the pro-life movement is there for the unborn and their mothers," said Kaitlin Makuski, political coordinator at Susan B. Anthony List.

Brown agrees with supporting of crisis pregnancy centers but is calling on anti-abortion rights groups to go further and change their legislative stances.

Swindell, a self-professed fiscal conservative, and Mahoney, who is not, both agree.

"I think it's a really important and healthy conversation to discuss how we can creatively come up with solutions for women and assistance when they're facing an unexpected pregnancy," said Swindell.

"When we had COVID and businesses shut down on order of the government, the government was there to provide a safety net through PPE grants, through other things. Can we kind of look at that as a little bit of a model here?" said Mahoney.

Brown says in the meantime, it’s up to the groups who don’t believe in abortion rights to be more supportive than ever in the public square and in private.

"That is essential for establishing our credibility as as being not just pro-life until the baby's born, but really supporting families and reducing the burdens that face parents both during pregnancy but also in the years that follow," said Brown.