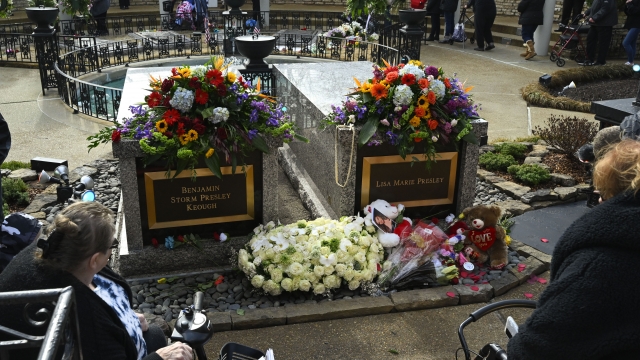 Family, friends and fans gathered at Graceland — the home of rock 'n' roll legend Elvis Presley — in Memphis, Tennessee, to mourn the death of Lisa Marie Presley, Elvis' only daughter.

There were also musical performances.

Lisa Marie Presley passed away earlier this month after reportedly going into cardiac arrest. The exact cause of death has not been announced.

She died just a few days after attending the Golden Globes in support of the movie "Elvis," a biographical drama about her father.

The 54-year-old had recently visited Graceland on what would have been her father's 88th birthday earlier this month.

Graceland is Lisa Marie Presley's final resting place, buried next to her father and her son, Benjamin Keough, who died by suicide in 2020 at the age of 27.

Fans from all around the world came to pay their respects, leaving notes and flowers in remembrance of her.

Fans also had a chance to visit her gravesite after the service.

"It's hard for anybody to lose a parent. We recently lost my father. And then now for Priscilla to lose a daughter, and then it's like Elvis is finally kinda gone with Lisa being gone. We all feel like this is the end," said Freda Steel, a fan from Alabama.

"It was heartbreaking because you know that that's pretty much the end of the Presley era," said Lindy Leos, a fan from Texas.

Instead of flowers, Presley's family is asking fans to donate to the Elvis Presley Charitable Foundation, which supports several causes in Memphis and the city's Whitehaven community.

By Jordan Strauss / Invision via AP
0:40