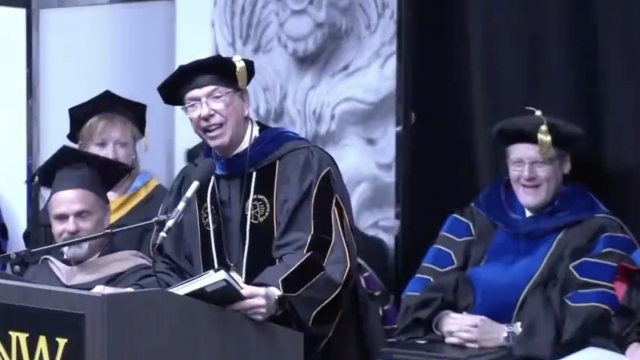 It's not the graduation speech students usually expect: At Purdue University Northwest, the chancellor made a racist joke that left many offended.

A speaker prior to Chancellor Thomas Keon said he sometimes used a "made up" language" to calm his granddaughter. Then, Keon seemed to respond by making up words in what he described as "my Asian version" of the previous speaker's method of speaking.

Student Gerardo Garibay Jr. was present at the Dec. 10 ceremony. He was surprised by the joke and described what happened after.

"I didn't hear anyone complaining much after it was made; they just kept going as if its business as usual," Garibay Jr. said.

Keon came to the university in 2011 with a resume including a 2016 award for diversity and inclusion from the industry magazine "INSIGHT Into Diversity."

The university, located about a 40-minute drive from Chicago, recently ranked top 20 in the Midwest for campus diversity by U.S. News & World Report.

Why Are Hate Crimes Against Asian Americans On The Rise?

Freshman international student from South Korea Minhwa Lee was shocked it was on a public stage.

"He's just joking about that," Lee said. "That's not the language, and that's not an appropriate situation."

The joke was met with laughter on-site during the ceremony, but it's a different story online. One person asked for Keon's removal, calling it "wildly inappropriate." Another asked for accountability that the joke was a "racist made up language."

Professor Kevin Nadal from John Jay College was one of those critics.

"When I first saw the video and saw that the chancellor of the university made such a casually racist joke that was at the expense of Asian Americans, I was quite shocked," Nadal said. "How could someone who was the leader of a university think that it would be okay, especially in this era?"

Keon has since issued an apology, saying, "I am truly sorry for my unplanned, off-the-cuff response to another speaker," adding, "We are all human. I made a mistake." He also said he's leading a team to look into Asian American issues at the school.

Newsy reached out to university, and they had no additional comment.

Still, the apology wasn't enough for some student organizations. PNW Fight Back demanded his resignation, and over 100 students and supporters have signed a petition for his removal.

Students at the PNW Marketing Club issued a statement saying they will not be collaborating with Keon or anyone directly working with him. Their president, Madison Sarkey, spoke with Newsy.

"I don't want to be part of the problem," Sarkey said. "I want to be in the right side of history, and in doing so, it's holding people accountable."

Keon's racist joke was said at a time when anti-Asian sentiments and hate incidents are high. Stop AAPI hate has tracked nearly 11,500 hate incidents in the first two years of the pandemic.