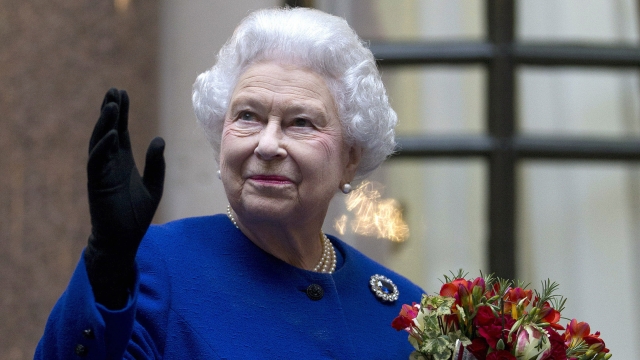 Speaking in 1940 — alongside her sister Margaret — to children who had been evacuated from their homes, as German bombs landed on British cities, Queen Elizabeth II said: "We know — everyone of us — that in the end, all will be well. When peace comes… it will be for us — the children of today to make the world of tomorrow a better and happier place."

From her very first national broadcast to the British nation to one of her last, the queen's guiding principle was courage.

"II think the importance of the queen is that she invigorates that sense of natural British optimism," cultural historian John Jefferies said. "She's not trying to say that things will be absolutely fine. She's saying that things may be very, very dark. But in the end, good will triumph over evil."

Young Elizabeth had an idyllic family upbringing, doted on by her parents. But it wasn't until her uncle,  Edward VIII, abdicated in 1936 — making her father, George IV, king — that it dawned on her she might one day be queen.

"Suddenly, this is a young girl who is thrown from almost a middle class upbringing," Jefferies continued. "They’re not a spectacular family; Not read about in the newspapers. They're extremely private. And suddenly, she's projected into being the heir of the monarch."

In 1952, Elizabeth became Queen of Great Britain and Northern Ireland, Head of the Commonwealth, and Defender of the Faith. She was 27 years old.

Becoming a monarch after her father died tragically young, her coronation was broadcast around the world.

Why does the U.K. still have a monarchy?

Christopher Miers is one of many of her subjects, with their own special memories of the queen.

"She was very beautiful," Miers said. "She had fantastic jewelry and amazing blue eyes."

Miers gave her a tour of his school in 1959 on its 100th anniversary, which was two years into her reign.

"When she visited my school, and I had to show her my room — when I went to bed that night, I could stretch out my hand and say, 'The Queen of England was here this morning.' That was a memorable moment."

Whether it's in person, or on television, the queen has made every effort to reach out to her public in happy moments and tragic ones, too.

In 1966 — in Aberfan in South Wales —116 children and 28 adults were killed after a catastrophic landslide collapsed on a school.

"When you look at Aberfan, and that dreadful, dreadful time, I think sometimes she was guided not to go and to raise more grief. But you could see how people reacted in that most dreadful time," Nina Purcell said. "She definitely helped those people comes to terms with their grief. It was very moving."

Queen Elizabeth II has been integral to the identity of Britain, playing her part in modernizing not just the monarchy; but the nation itself — serving her subjects with humility, dignity, and courage throughout.

Princess Diana captured the hearts of millions. Her death devastated the nation. The queen was condemned for not being publicly present in the days that followed. The negativity that surrounded the monarchy quickly disappeared.

"There was criticism that the queen hadn't returned to London earlier, and I think that criticism was unfounded, because her immediate priority were for the Princes William and Harry," Jefferies said. "And when she felt able to address her people, she did it. And I think she did it brilliantly. And somehow, the nation felt able to move on again. I think things like that imprint the memory of Elizabeth II, not just in her own time, but in generations far beyond our own."

And again In 2017, after a fire destroyed a high rise in north west London, killing 77 people, the queen arrived at the remains of Grenfell Tower to speak to survivors and the bereaved.

"She's been there for events as recently as the Grenfell Tower disaster," Jefferies continued. "I think in those moments, we see the queen as someone who understands us, who empathizes with us. When things go well, but also in the darkest of times."

For the queen, family has been central to her success — relying on loved ones for support and to help share royal responsibilities.

But the queen was also forced to confront very public family disagreements. Most recently, in 2020, expressing her regret at Harry and Meghan's decision to quit as senior royals.

"The success of Elizabeth II has been that she has risen above politics. She has been able to unite the nation and the commonwealth and I think that younger members of the royal family don't understand that so well because everyone wants to have an opinion and they want their opinion to be listened to," Jefferies said. "And Elizabeth was born in 1926. She realizes that the strength of her position depends on the fact that she is not opinionated. The strength of her character is that she understands that she must rise above politics, and only by rising above politics can you unite the nation and, indeed, the wider commonwealth."

Prince Philip, the Duke of Edinburgh, died in 2021 at the age of 99. It was a 70-year-marriage in which the couple, who had four children together, often navigated challenging times.

"Her husband died and even at the funeral, because of distancing, she couldn't be surrounded by her family," Jefferies continued. "You see that image of her in Westmisnter Chapel and she's alone and she's wearing the face mask. This must have been a time of terrible grief for her and yet, within days, she was once again carrying out her official responsibilities. And I think that sense of duty and obligation and not feeling sorry for yourself, those are qualities that sometimes we associate with the second World War. But actually. those are qualities which still inspire people today through the example of Queen Elizabeth."

Her death leaves more questions about the future of the monarchy than answers.

But in her time, Queen Elizabeth II was steadfastly loyal, dependable and courageous.

"I can think of nobody who could've done it with greater love, humility, and empathy," Jefferies said.