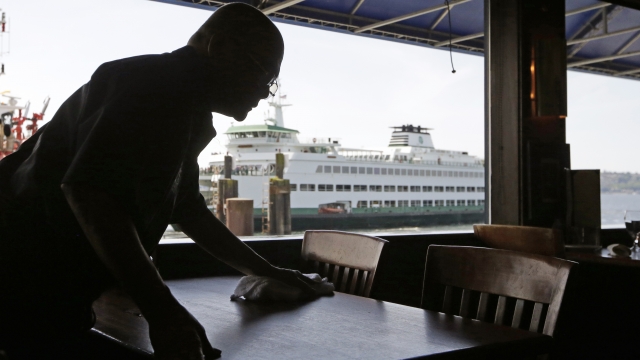 Many restaurant owners are changing the way they've done business as crucial ingredients and other supplies get tied up in distribution.

A trip to Seattle's waterfront wouldn't be complete without a visit to Ivar's Acres of Clams restaurant for fish and chips and clam chowder. But as disruptions to the global supply chain leave restaurants like this without essential ingredients, they're coming up with creative ways to keep the orders flowing.

He highlighted his plan for funding in the bipartisan infrastructure bill, calling ports critical to the nation's economy.

From creating backup distribution centers in rented refrigerator trucks to contracting a truck in Wisconsin to ship bread crumbs across the country — Ivar's President Bob Donegan says disruption is the new normal.

"In August — the busiest time of the year — our distributor failed to deliver on a Friday before a busy weekend to 13 of our 24 locations," he said. "That's a disaster. That means we'd be out of food at the busiest time."

Donegan expects the disruption to last through at least next summer and from his location on Pier 54, he has a front row seat to watch the supply chain bottleneck unfold in real time.

"You can see the white container cranes," he said. "I understand from my friends in the maritime industry that there's 9,000 containers filled with goods with value over $1 billion, sitting in there waiting to be taken to stores and warehouses."

Seattle food distributor Merlino Foods is one of the warehouses waiting for those containers to be unloaded.

The company's vice president Jeff Biesold uses ship tracking software to follow his orders of pizza flour, olive oil and canned tomatoes as they make their way from Italy. However, he says the real problems arise once the ships reach Seattle.

"When you're watching your boat that has critical ingredients sitting here for a month, it's absolutely frustrating," Biesold said.

Orders from Italy that used to take 12 weeks and arrived like clockwork now come months later, if at all.

All of this scarcity foretells yet another ripple effect of the global supply chain — the rising cost of food.

In October, Ivar's had to raise their prices by 4% to keep up with these rising costs. However, Donegan says he wouldn't be in the business if he wasn't up for the challenge. He says problem-solving is part of the job.

Ivar's has been located on Seattle's waterfront for more than 80 years, and Donegan says he plans on having it around for at least another 80 years.