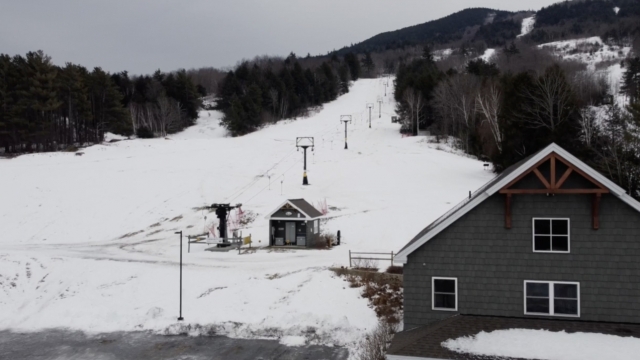 The Ascutney Mountain in West Windsor, Vermont, has always been a major part of Shelley Seward's life.

She started skiing at Ascutney at the age of two. Her father also worked at the mountain as a ski patroller.

The mountain first started welcoming skiers in the winter of 1935. Seventy-five years later, it went into foreclosure.

The closure of Ascutney Mountain led to a loss of jobs and revenue for the area.

"There was a real palpable, almost depression in the community, especially from an economic perspective," Seward said. "We lost our way."

The town of 1,400 people was determined to climb its way out of economic uncertainty. It all started with the installation of a rope tow a few years back.

A group of volunteers got together and managed to get a power company to donate electrical poles. Old car rims make up the pulley system. Once the rope tow started operating, the rebirth of this rural economic driver was well underway.

"It's easy terrain to maintain so we can ski with a minimal amount of snow," explained Glenn Seward, who once worked as the director of mountain operations.

Through volunteer efforts and donations, the town came together to buy back the failed ski area in 2015. Residents, all volunteers, handle everything from lift operations to ticket sales. There's no longer a private company running the mountain.

"Many of the people who volunteer here don't ski, they don't bike, they just want the community to be successful," Shelley Seward said.

The group formed the nonprofit now known as Ascutney Outdoors. They've helped reopen the mountain and turn it into a year-round destination for everything from mountain biking competitions to snow tubing. A lift ticket costs just $20.

Part of the hope is to bring new skiers into the industry at a time when the price to ski or snowboard has skyrocketed.

"We made a decision early on, in order to be sustainable we had to be right-sized," Shelley Seward added.

There's no fancy high-speed quad lift to the top. They also don't make their own snow. The idea is to keep it simple. Given the volunteers they have, the mountain is only open on weekends

"What we're trying to avoid is a significant amount of overhead," Glenn Seward noted.

Approximately 60 million Americans call rural communities home. However, post-pandemic recovery has been slower than in urban areas. Rural employment is down about 1%.

In West Windsor, a general store near the mountain has been able to bring back 25 jobs since the ski resort reopened.

"It's not short-minded goals, it's a long-term vision," said co-owner Peter Varkonyi.

Residents see a symbiotic relationship between a mountain, a town and its resurgence as a success story for other rural communities that have lost their main economic driver.

"Don't be surprised at how much energy and enthusiasm you can draw from your own community," she said.