Richard Spencer Is Reportedly Banned From Over 26 European Nations 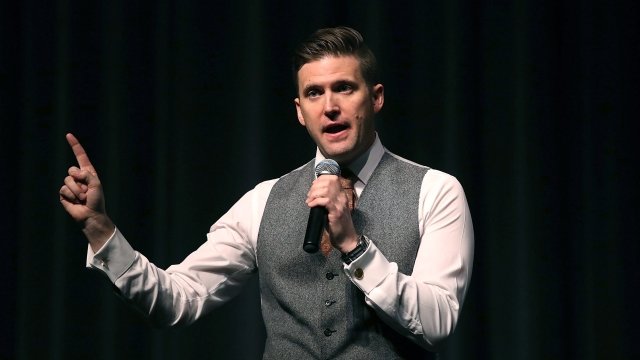 Poland's state-run news agency reports the country's authorities issued a five-year ban on Spencer entering the Schengen Area, which is made up of 26 countries, including Germany, France, Spain and Italy.

The Schengen zone is a "border-free area" in which member states agreed to abolish internal border controls. Citizens of the 26 countries can travel freely within the Schengen Area and are only checked when crossing an external border.

Spencer already has a rocky history with Poland. In early November, he was scheduled to attend a far-right conference in Warsaw, but the country's foreign ministry pushed back on his plans.

The suit was filed in federal court Sunday after the university refused to rent space on its campus for an event with the white nationalist.

The ministry said that "as a country which was one of the biggest victims of Nazism," it thinks the ideas Spencer and his followers promote may be "a threat to all those who hold dear the values of human rights and democracy."

Spencer's a leader of the so-called "alt-right," a white nationalist group. He took part in the deadly white nationalist rally in Charlottesville, Virginia, in August, which drew "alt-right" activists, neo-Nazis and members of the Ku Klux Klan, among others.

Spencer was reportedly banned from the Schengen Area for three years in 2014 after he was arrested in Hungary and deported. Spencer told The Associated Press he will try to contest the new ban.