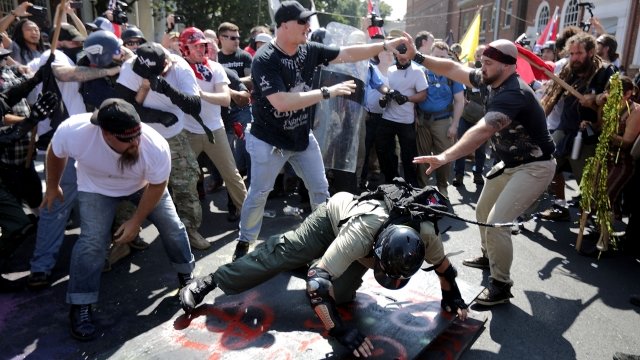 Several people were injured after being hit by a car at a white nationalist rally in Charlottesville, Virginia.

Virginia's governor declared a state of emergency after a white nationalist rally turned violent in Charlottesville, Virginia. At least one person is dead, and several others are injured.

An event called "Unite the Right" drew hundreds of protesters to oppose a plan to remove a statue of Confederate Gen. Robert E. Lee.

Demonstrators marched on the University of Virginia's campus Friday night and protested at a local park Saturday.

Some protesters carried Confederate flags and chanted "you will not replace us." They were met with hundreds of counterprotesters, and several violent incidents broke out.

A car ran over a group of counterprotesters. Police said there were multiple injuries, though the severity is unknown. But, Charlottesville's mayor tweeted after the incident that "a life has been lost."

'Hatreon' Is The New Crowdfunding Platform For The 'Alt-Right'

Banned from sites like Patreon and PayPal, so-called "alt-right" influencers are moving to "Hatreon" to fund projects.

Virginia Gov. Terry McAuliffe said, "Public safety cannot be safeguarded without additional powers ... I am disgusted by the hatred, bigotry and violence these protesters have brought to our state."

The scenes in Virginia were similar to others that happened around far-right protests at Berkeley, California, and Portland, Oregon.

Police declared the event an unlawful assembly and made several arrests. At least two people sustained injuries that were not life-threatening in fights between protesters and counterprotesters.

President Trump later addressed the violence during a press conference.

"We condemn in the strongest possible terms this egregious display of hatred, bigotry and violence on many sides, on many sides. ... What is vital now is a swift restoration of law and order and the protection of innocent lives."