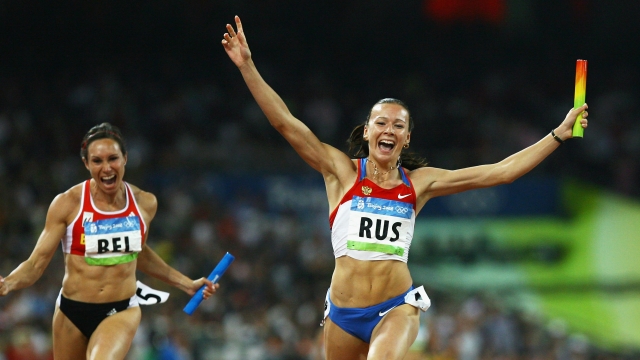 Yulia Chermoshanskaya has been stripped of her gold medal from the 2008 Beijing Olympics after her urine sample tested positive for two steroids.

This year's Olympics has been an embarrassing affair for the host nation of Brazil, but they just picked up a medal — from 2008.

SEE MORE: Crime, Corruption And Zika: Why The Rio Olympics Could Be A Disaster

Brazil will get the bronze for the women's 4x100-meter relay from the Beijing Games after the International Olympic Committee announced the Russian team has been disqualified for doping.

Russia took the gold in the relay, with Belgium in second, Nigeria in third and Brazil just missing the podium. Now each country will get to move up one spot.

The IOC decided to test saved urine samples after whistleblowers revealed that the Russian government provided athletes with steroids and helped conceal their dirty samples.

If Chermoshanskaya is bummed out about costing her team gold, she'll at least have some people to commiserate with. She was one of 14 Russian Olympians caught cheating after their Beijing samples were retested.

Russia's pervasive state-sponsored doping has become such a big issue, the country was forbidden from sending track and field athletes to this year's games.

The world anti-doping agency called on the IOC to suspend the entire Russian federation after an investigation found the doping program wasn't just isolated to track and field, but the IOC declined.