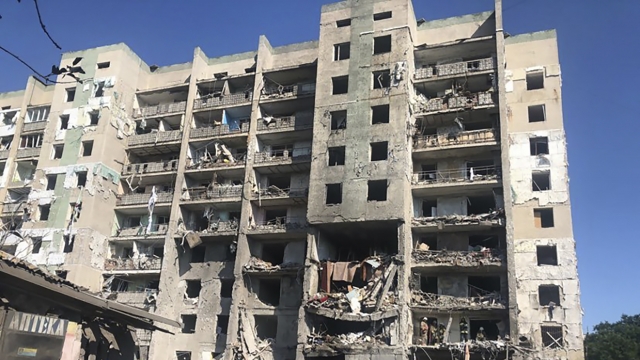 Children are among at least 21 people killed from a Russian missile strike on a residential area, according to Ukrainian officials.

Russian missile attacks on residential areas killed at least 21 people early Friday near the Ukrainian port of Odesa, authorities reported, a day after the withdrawal of Moscow's forces from an island in the Black Sea seemed to ease the threat to the city.

Video of the attack before daybreak showed the charred ruins of buildings in the small town of Serhiivka, about 31 miles from Odesa. The Ukrainian president’s office said three Kh-22 missiles fired by warplanes struck an apartment building and a campsite.

Ukrainian authorities interpreted the attack as payback for Russian troops being forced from Snake Island a day earlier, though Moscow portrayed their departure as a “goodwill gesture” to help unblock exports of grain from the country.

Russian forces took control of the island in the opening days of the war in the apparent hope of using it as a staging ground for an assault on Odesa, Ukraine's biggest port and the headquarters of its navy.

“The occupiers cannot win on the battlefield, so they resort to vile killing of civilians," said Ivan Bakanov, head of Ukraine’s security service, the SBU. "After the enemy was dislodged from Snake Island, he decided to respond with the cynical shelling of civilian targets.”

Large numbers of civilians died in Russian airstrikes and shelling earlier in the war, including at a hospital, a theater used as a bomb shelter and a train station. Until this week, mass casualties involving residents appeared to become less frequent as Moscow concentrated on capturing eastern Ukraine's Donbas region.

But Russian missiles struck the Kyiv region last weekend after weeks of relative calm around the capital, and an airstrike Monday on a shopping mall in the central city of Kremenchuk killed at least 19 people.

Ukrainian media reported said 21 people were killed, including children. It said 38 others, including six children and a pregnant woman, were hospitalized. Most of the victims were in the apartment building, Ukrainian emergency officials said.