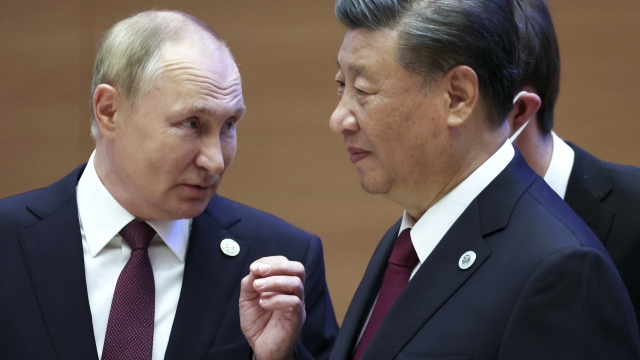 Russian President Vladimir Putin vowed Friday to press his attack on Ukraine despite its latest counteroffensive and warned that Moscow could ramp up its strikes if Ukrainian forces target power plants and other infrastructure in Russia.

Speaking to reporters Friday after attending a summit of the Shanghai Cooperation Organization in Uzbekistan, Putin said the “liberation” of Ukraine's entire eastern Donbas region remained Russia’s main military goal and that he sees no need to revise it.

“We aren’t in a rush,” the Russian leader said, adding that Russia has only deployed volunteer soldiers to fight in Ukraine.

Russia was forced to pull back its forces from large swaths of northeastern Ukraine last week after a swift Ukrainian counteroffensive. Ukraine's move to reclaim control of several Russian-occupied cities and villages marked the largest military setback for Moscow since its forces had to retreat from areas near the capital early in the war.

Asked about the Ukrainian counteroffensive, Putin replied: “Let’s see how it develops and how it ends.”

He alleged that Ukraine has attempted to launch attacks “near our nuclear facilities, nuclear power plants” in Russia and vowed to do “everything to prevent any negative turn of events.”

“We will retaliate if they fail to understand that such methods are unacceptable, they don't differ from terrorism,” Putin said.

“I know your stand on the conflict in Ukraine and the concerns that you have repeatedly voiced,” the Russian leader told Modi. “We will do all we can to end that as quickly as possible. Regrettably, the other side, the leadership of Ukraine, has rejected the negotiations process and stated that it wants to achieve its goals by military means, on the battlefield.”

Ukrainian President Volodymyr Zelenskyy has said it is Russia that allegedly doesn’t want to negotiate in earnest. He also has insisted on the withdrawal of Russian troops from occupied areas of Ukraine as a precondition for talks.

Putin's remarks during the talks with Modi echoed similar comments he made during a meeting with Chinese President Xi Jinping the previous day.

China and India have refused to join Western sanctions against Russia over its war in Ukraine while increasing their purchases of Russian oil and gas, helping Moscow offset the financial restrictions imposed by the U.S. and its allies.

The Shanghai Cooperation Organization was formed by Russia and China as a counterweight to U.S. influence. The group also includes India, Pakistan and four ex-Soviet Central Asian nations of Kazakhstan, Kyrgyzstan, Tajikistan and Uzbekistan. Iran is on track to receive full membership.

On Thursday, Putin held a one-on-one meeting with Xi and thanked the Chinese leader for his government’s “balanced position” on the Ukraine war, while adding that he was ready to discuss unspecified China’s “concerns” about Ukraine.

Xi, in a statement released by his government, expressed support for Russia’s “core interests” but also interest in working together to “inject stability” into world affairs.