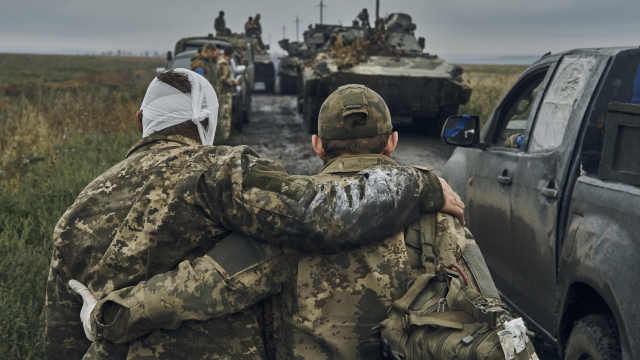 In a lightning strike, Ukrainian tanks and armored vehicles drove the Russian army out of town after town.

Says the Institute for the Study of War in Washington: "Ukraine has turned the tide of  this war in its favor."

That is partly because the fleeing Russian troops left behind tanks, armored vehicles and high-value military weapons, depleting their firepower and potentially preempting any counterattack.

Ukrainian soldiers documented trophies of triumph on social media, including munitions the Russians never got the chance to fire or even pack up and take with them.

As the scope of the counteroffensive became clear, Ukrainians and the world were fixated on images from the front lines. The country's blue-and-yellow flags were raised over towns and Russian flags were desecrated.

The veil of silence imposed by Kyiv to protect the secret build-up and surprise attack seems to have been lifted.

"Everything around is destroyed. But we will restore everything. Izyum was, is and will be Ukraine," he said.

The soldiers showed off their victories, and the international legion of foreign fighters including Americans were also there.

One unit ripped down a Russian propaganda sign, revealing the original message of the country's preeminent poet, Taras Shevchenko: "fight and you will win." But the coming days may bring sobering images.

Investigators must make their way through a still-dangerous battlefield to look for evidence of war crimes.

"There are lots of land mines. It takes lots of time to remove those mines so those graves can be found. The liberated areas are mostly small settlements. A few towns, but in terms of territory, small villages or agricultural land," said Nataliya Zubar, a Ukrainian human rights monitor.

And there is the threat of revenge and retaliation. Although Russian ground forces are no longer within striking distance of Kharkiv, Ukraine's second-largest city, Russia's missiles still are and almost immediately struck the power grid — leaving the celebrating city in darkness.