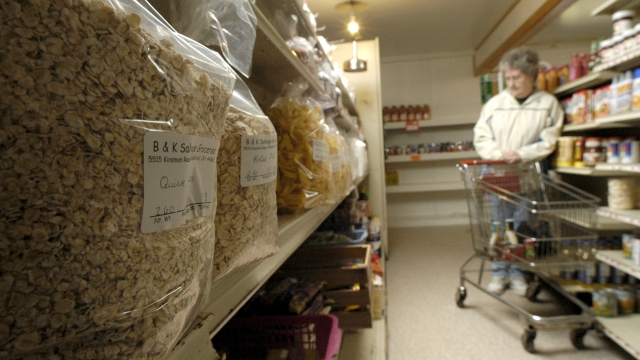 Places like Esh’s, a market in Colorado, do things differently to make groceries more affordable.

Among all the items they sell, some items might be nearing their expiration date. In some cases, packages are slightly damaged.

Other stores would often throw the items away, but salvage stores sell them at a discount.

“We’re usually about 50% to 45% cheaper than any store out there,” said Phillip Francis, a manager at Esh’s.

Apps show where to find salvage food near you

You won’t find salvage grocery stores in every community, but these days there are apps you can use, like Flashfood, which partners with stores in about half the country.

Josh Domingues came up with Flashfood as a way to help consumers save money and cut down on food waste.

“It’s not just a matter of big, bad retailers,” he said. “It’s also as consumers, when we go grocery shopping, we’re reaching in the back for whatever has a longer shelf life.”

The app allows users to find deals on foods that are approaching their best-by dates.

But is it safe?

“It’s just that it will maintain its best quality by that date,” she said.

Instead of tossing food near its date, she says to check foods for:

Otherwise, she said, there is nothing wrong with hunting for salvage food deals.

“They had a whole rack of lamb for five bucks,” she said. “That’s a deal!”

And that way you don’t waste your money.

These apps will help you save money on groceries

You can’t stop food shopping, and you can only cut so many corners while keeping your family healthy. Here are some apps to save on groceries.