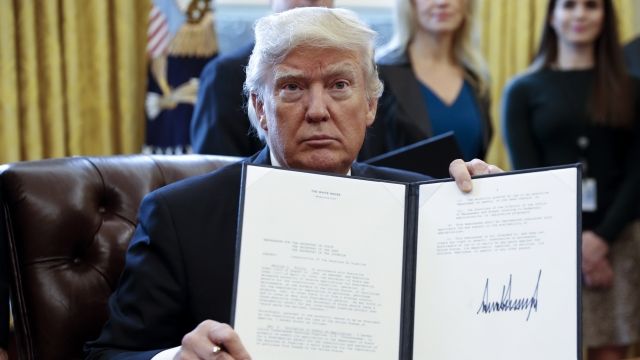 A Seattle judge halted an executive order banning travel from seven countries. A similar legal challenge was dismissed in Boston the same day.

President Trump's executive order on immigration was both upheld and rejected in federal courts Friday.

A judge in Boston declined to extend a stay on detentions and deportations under the order. But a Seattle judge issued a nationwide stay on the entire order as a broader legal challenge goes to trial.

Trump's order has sparked widespread protests and legal challenges. It temporarily bans most residents from seven Muslim-majority countries, including refugees, from entering the U.S.

It's perfectly legal for Trump to restrict immigration he believes would be detrimental to U.S. interests. What he can't do is discriminate against religious groups.

Exception In Immigration Ban Lets Hundreds Of Refugees Into The US

Nearly 900 refugees who were traveling to the U.S. as President Trump signed an immigration ban will still be allowed in.

Trump and his supporters have previously suggested the ban was designed to block Muslims from entering the U.S. But the Boston judge found nothing in the order that explicitly targets any religion.

The Trump administration has explicitly denied that the order was meant to target Muslims.