Articles Of Impeachment Arrived In The Senate. The Trial Comes Next. 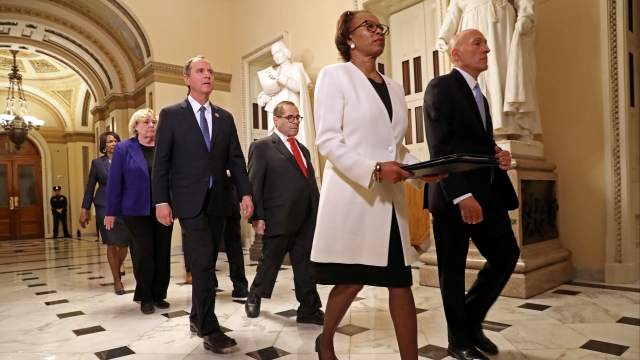 The process of sending the articles of impeachment from the House to the Senate included a lot of pomp and circumstance.

The two articles of impeachment against President Donald Trump were transmitted to the Senate Wednesday, formally triggering the Senate trial.

The process of sending those articles included a lot of pomp and circumstance.

House Speaker Nancy Pelosi had delayed this step because she wanted to know the rules for the Senate trial first. But Senate Majority Leader Mitch McConnell refused to comply. He'd only say his proposed rules would follow the precedent set during President Bill Clinton's impeachment.

How Did The Senate Handle Witnesses For Clinton's Impeachment Trial?

Rules for Clinton's impeachment trial passed the Senate 100-0. But that doesn't mean there weren't any disagreements on what should happen.

Now that the Senate has the articles, the trial will begin with all senators taking an oath and the swearing in of the House impeachment managers. The Senate's first real task is passing rules for the trial. They'll set out how long each side will have to present its case, the process senators will use to ask questions and other details.

The White House said Wednesday it's ready to move this process forward and that it's confident the president will be acquitted.

A senior administration official told Newsy: "These are the weakest articles of impeachment that have ever been passed in any presidential impeachment. They state no violation of a crime, no violation of any law. And the idea that it is obstruction of justice, obstruction of Congress, for the president to assert constitutionally grounded privileges that protect the separation of powers is absurd."

President Trump is the third president in American history to be impeached. The Senate trial is estimated to last about two weeks, but if lawmakers decide to hear from witnesses, it will likely go longer.