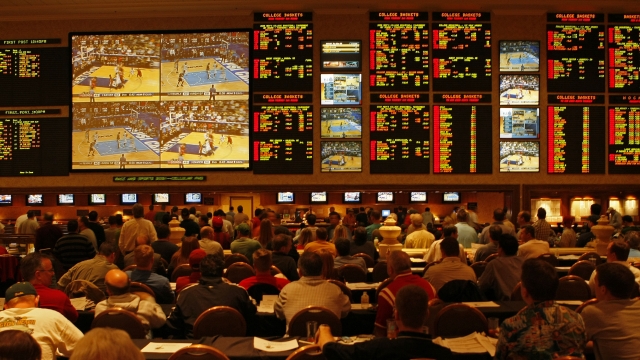 Turn on any sports game, and it'd be hard to escape commercials for sports betting from companies like Fan Duel and Draft Kings.

A Pew survey found a fifth of all U.S. adults say they bet money on sports in 2022 — a huge change from just four years ago, when the Supreme Court made it legal for states outside of Nevada to set their own rules for legalizing sports betting.

Earlier this year, Ohio became the latest to join 35 other states and Washington, D.C., which have legalized sports betting with age restrictions. By the end of 2023, three more states could join that list.

It's clear the craze of sports betting is taking over fast, leaving many to wonder if there are any signs of it slowing down as it makes a clean sweep across state legislatures.

At first, major sports leagues were very wary of any associations with gambling after decades of high-profile scandals. But NBA Commissioner Adam Silver wrote a now-famous op-ed in the New York Times that broke the mold, siding with the AGA arguing "$400 billion" in illegal gambling was already taking place anyway. That stat would also be cited by lawmakers trying to legalize betting in Pennsylvania and West Virginia.

A mathematician's view on lotteries and betting

Experts on the numbers agree: The lottery is a game, and there will be a winner. But is it worth an investment of your time and money?

The AGA recommended states impose a relatively low 10% tax on the revenue for gambling companies to encourage faster growth. In exchange, they predicted state governments could make hundreds of millions of dollars in new revenue.

Now, four years after the 2108 Supreme Court ruling, was that actually the case?

States were so eager to get gambling operations online, few regulations or even rule enforcements were put into place. Some states let companies begin operating before full reviews of their practices were finished: In Iowa and Tennessee, companies let gamblers add money via credit cards, even though the states had outlawed such practices. Louisiana State University partnered with betting companies and encouraged students to place bets, even though gambling is widely illegal for anyone under 21 in Louisiana.

The AGA introduced its own code for "responsible marketing" and claims to self-regulate; the code includes things like no marketing toward underage audiences or irresponsible betting.

A New York Times investigation found most states didn't provide much more enforcement than this. In New Jersey, for example, regulators initially wanted to review all ads but gave up after two years from too many ads coming through.

But in exchange for giving the industry a very long leash, many states haven't been seeing the revenue numbers as estimated. Some state revenues have been as low as half of what was estimated by the AGA. There were a few states that overperformed, though after ignoring the associations advice: New York set a high tax rate of 51% on gambling company revenues and brought in half a billion in revenue just within the first 10 months of 2022. That made up half of all sports betting tax revenues combined nationwide.

As for that $400 billion in illegal gambling Silver mentioned, it's not too clear how much of a dent legalization actually made. That same New York Times investigation mentioned earlier found the number didn't stand up to much scrutiny — the NBA and AGA cite a 1999 report to Congress about the harms of gambling, which put the estimates of illegal betting anywhere "between 80 billion and 380 billion." One economics professor, who admitted regretting citing the same figure in his own paper, told the Times, "The number is pretty much pulled from the air."

As the legal fight was first unfolding, "60 Minutes Sports" interviewed two former illegal bookies — both with mob ties — on how legal betting could overtake the illegal scene. Both had similar responses:

"They won't take it over. They won't even put a dent in it," said John Alite, former Gambino family associate.

"Cause the guy that has no money in his pocket, that's betting on the [games], is still gonna call a local bookmaker to bet because he can bet with no money," said Angelo Lutz, a restauranteur and former bookie.

The rise of sports gambling

Sports gambling is more widely allowed now because of a 2018 decision from the Supreme Court.