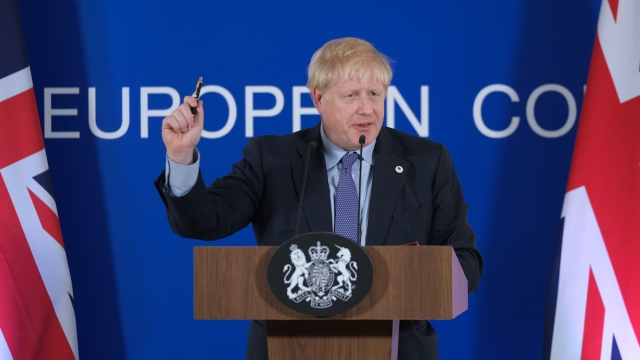 Some Conservatives are coming around to Johnson's deal, but Labour, the Scottish National Party and others have already said they'll vote no.

After securing a new Brexit agreement with the EU, U.K. Prime Minister Boris Johnson will face perhaps his toughest hurdle yet during Saturday's Parliament vote.

Johnson's deal is similar to the one formed by his predecessor Theresa May, with the main exception being the removal of the Northern Ireland backstop clause. Under the new agreement, Northern Ireland would remain in the U.K.'s customs union. But it still has to follow EU rules and regulations for goods coming to and from Great Britain, which means anything being shipped out of the region will still need to go through the EU customs process.

Despite getting the EU on board with the new deal, the prime minister still has to gain the support of the House Commons. He'll get his chance during a rare weekend session that British media are calling "Super Saturday." The chamber has only sat on a weekend four times before, most recently during the outbreak of the Falklands War in 1982.

Johnson needs to convince more than half the 650 lawmakers in the House of Commons to back his plan. That's easier said than done, given that the House shot down May's deal three times, leading to her resignation earlier this year.

Reactions to the new deal have been mixed so far: Some former Conservative Party members have announced their support, and several hardline Conservatives who rejected May's deal are also expected to back it. But the opposing Labour Party, the Scottish National Party and the Liberal Democrats have all said they will oppose it. Worse, Northern Ireland's Democratic Unionist Party — Johnson's sometime ally — denounced the agreement, saying Johnson's proposals would not be "beneficial to the economic well-being of Northern Ireland and ... undermine the integrity of the union."

Saturday's session will begin in the morning, with the voting likely to begin sometime in the afternoon. If Johnson can't get the deal passed by 11 p.m., he'll legally be required to ask the EU for an extension to the Oct. 31 Brexit deadline.