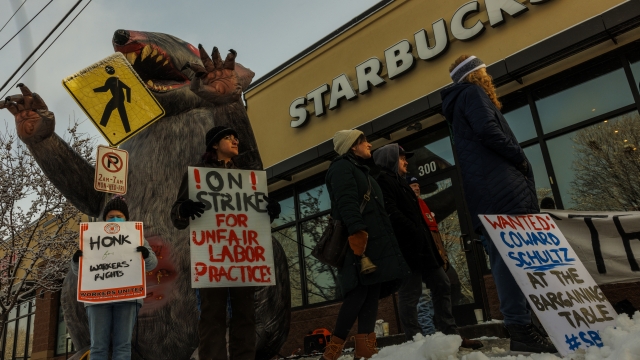 Strikes at 100 Starbucks stores are causing some closures and some instances of reduced staff to keep things running.

Braving the cold, the wind and frustrated caffeine addicts turned away from their morning fix, Starbucks workers at 100 stores across the U.S. began a three-day walkout on Friday.

This is their longest strike to date in a push for better working conditions. Their demands include guaranteed schedules for full and part-time workers, improved health and safety parameters in stores and seniority rights.

The effort is part of a year-long fight that's ruffled feathers within the company, punctuated by the closure of the first Starbucks store to unionize. The company says the Seattle store was closed for safety reasons.

"We're striking because of unfair labor violations happening across the entire United States from things like intimidating workers, to being anti-union, taking down signs illegally," said Kit Grob, the shift supervisor at one Starbucks location.

The Changing Tide For Unionizing In The U.S.

Unionizing has been making an unusual comeback in the U.S. as the economy roars back from pandemic lows, but efforts don't always mean success.

Not even a month ago, striking workers closed some Starbucks stores on the company's "Red Cup Day," a massive promotional event for holiday drinks.

"We can shut things down like we did today if they're not willing to hold up their end of the pot," Grob said.

The fight is part of a larger national swing in favor of unions.

"The nature of work has changed, and I feel that workers feel now more than ever the need to be able to come together to provide that strength, that unity in numbers provide to negotiate with those companies," said Fred Yamashita, the executive director of the Arizona AFL-CIO trade union.

A Gallup poll this year found a 71% approval rating for unions — the highest since 1965.

It's a feeling these Starbucks workers hope they can leverage to improve conditions behind the counter.

"We have the courage to stand up against the company," said Jacob Lawson, a recently fired union organizer of the Cottonwood Heights store. "It's not easy, but somebody has to do it."