Congressional Panel To Ask Bannon About Those 'Fire And Fury' Quotes 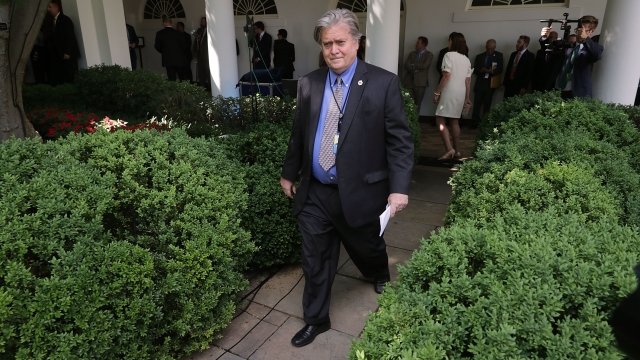 Lawmakers will likely question him about comments attributed to him in Michael Wolff's book "Fire and Fury: Inside the Trump White House."

According to the book, Bannon criticized the 2016 Trump Tower meeting involving campaign officials, Donald Trump Jr. and some Russians — calling it "treasonous" and "unpatriotic."

Bannon also told Wolff he thought the special counsel's investigation into Russian meddling in the 2016 presidential election would likely zero in on money laundering and said, "They're going to crack Don Junior like an egg on national TV."

Bannon-Trump Fight Could Splinter GOP's Populist Base In 2018

It could come down to who that base sees as its leader.

Since the book's release, Bannon stepped down as the head of Breitbart News.

Beyond Robert Mueller's probe, the House Intelligence Committee is one of multiple congressional panels investigating Russian meddling and potential links to the Trump team.