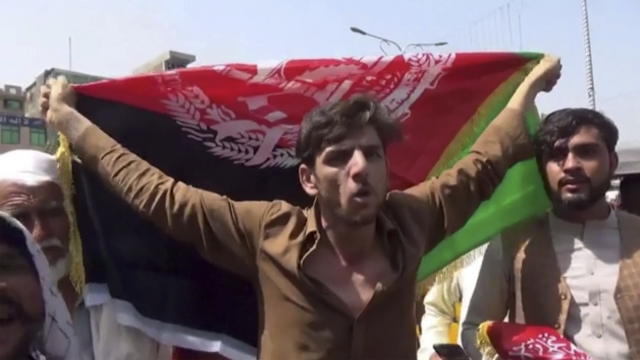 This year, Independence Day in a shaken Afghanistan is one of contradictions from the Taliban and challenges from a vocal, young generation.

Independence Day in a shaken Afghanistan, met by contradictions from the Taliban and challenges from a vocal, young generation.

Anti-militant chants of “Our flag, our identity” echoed down the streets of Kabul Thursday, while heavily armed fighters patrolled the city they took, without battle, on Sunday.

Protests across the north erupted in violence, suggesting the new Taliban won’t tolerate dissent: In Jalalabad, they fired on demonstrators waving the Afghan flag – not the Taliban’s white one. People bolted, but at least three Afghans were killed. More protesters were reported dead in Konar province.

Opposition is building in the northeast province of Panjshir, where Afghanistan’s Vice President is urging citizens to resist with him. Hospital admissions of wounded Afghans are rising there.

Some interpreters got emails from the U.S. notifying them they're approved to leave but they can't get close to the airport entrance.

But in other parts of the country, the Taliban show a different side. In the bustling city of Herat, they’re allowing girls to return to school, telling them they can continue their education, as long as they cover themselves in the hijab.Less than a week into controlling the country, leaders are sitting down with influential Afghans, trying to form a new government that follows their vision of obeying Islamic law. They see it as a rightful end to two decades of foreign occupation. Reports of human rights abuses abound -- including a young man, allegedly beaten for wearing jeans. But the U.S. government insists Americans aren't being harmed.Still -- sources tell Newsy the Taliban are preventing evacuations for Americans and cleared Afghans. One interpreter telling us they now have to scramble to find printers for documents, a new restriction imposed by the Taliban.