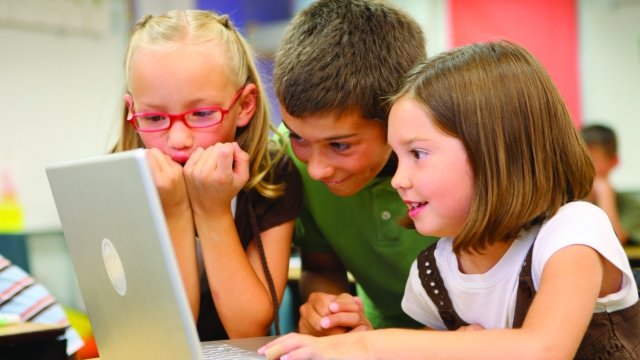 Scientists are still trying to figure out if and how socioeconomic factors influence brain development in young kids. According to a recent study from the Massachusetts Institute of Technology, simply engaging back and forth with a child builds stronger connections in their brain — regardless of their socioeconomic background.

Rachel Romeo and a team of researchers at MIT recorded the conversations 4- to 6-year-olds were having each day. They also analyzed MRIs of their brain pathways. They found kids 6 and younger who held lots of conversations had more and stronger white matter.

"This relationship between conversational turns and brain structure was independent of socioeconomic status," Romeo said. "So even children from the lowest income groups who experienced lots of conversations had really strong brain connections. And these brain connections are what predicted their language skills."

Beliefs about early language in kids can be a contentious issue. In 1995, one paper popularized the idea of a "word gap" between higher- and lower-income families. It suggested kids in poorer families might have heard some 30 million fewer words by age 3.

This study has since been cited in at least 8,000 academic publications, and it drew lots of attention to early childhood learning. Today, however, some critics say the original study could be contributing to discrimination in education.

Romeo and her team didn't set out to test that old hypothesis. But she says research from her team and others in the field has shown that when it comes to measuring kids' development, counting words is probably not as useful as natural dialogue, anyway.

What Does The Word Gap Mean For Kindergarten Students?

"It seems like it's more about the quality of the language exposure," Romeo said. "It's not like a quota you're trying to get. It's more like you're trying to have high-quality interactive conversations, to have lots of diverse words."

Moving forward, Romeo suggests that changing the way people talk about learning could be better for kids. She says researchers should consider the word counts kids learn as a "difference," rather than a "gap." As far as her work goes, the main takeaway is clear: Any adult having back-and-forth conversations could help a child's brain grow.

A note about this story: A previous version made unsupported connections between different research studies. You just heard the updated version.