What Does The Word Gap Mean For Kindergarten Students? 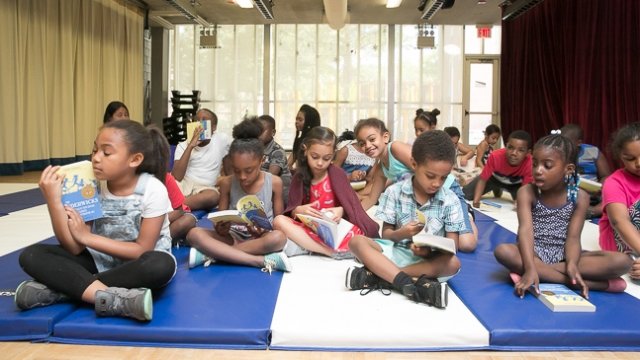 There's a major gap in preparedness between low-income children and their higher-income counterparts when entering elementary school. That gap is roughly 30 million words.

The idea is that children typically hear as many as 45 million words by age 4. On the low end, that number is 13 million words, thus the roughly 30 million word gap. Let's put that into perspective:

Based on the screenplay written by Barry Jenkins, you'd have to watch the Oscar award-winning film "Moonlight" 1,400 times.

And you'd have to read George R.R. Martin's "A Song of Ice and Fire" book series nearly 17 times to get to 30 million words.

That problem is made worse in low-income urban communities where access to children's books is rare. Those areas are known as book deserts.

This Group Has Given Out 160 Million Books To Kids

Many of the kids First Book reaches have never had their own books.

Books are essential for learning because they offer young children a much more sophisticated vocabulary than so-called baby talk.

And when books are available, reading aloud is an important way to expand a child's vocabulary. A Pew survey found that parents with a college degree were more likely to read aloud to their children than parents with only a high school diploma.

There's a pretty significant snowball effect that can take place when children aren't prepared for school and struggle to catch up. In short, it can affect their success later in life, and some doctors have noted that education can even affect a person's health. Luckily, the issue of childhood literacy has a possible solution: giving more children in low-income communities access to books.

Aside from the various efforts taking place in cities across the country, the White House launched the Book-Rich Environment Initiative this year. It partnered with nonprofits to reportedly deliver more than a quarter of a million books to 36 low-income communities.