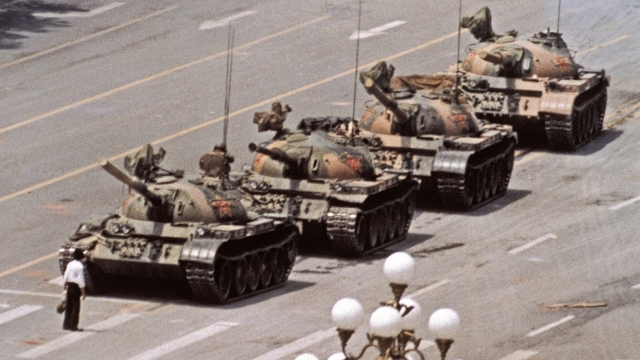 Former AP photographer Jeff Widener talks about the censorship of his iconic photo and why — 30 years later — the "Tank Man" is still relevant today.

Thirty years ago, pro-democracy protests turned violent in China's Tiananmen Square. The military shot protesters and ran over them with tanks — leaving thousands dead. One of the most iconic images of the demonstrations was taken by AP photographer Jeff Widener.

Jeff Widener: "So I'm looking over the balcony when I hear these tanks coming down the street. And I'm getting ready to take a picture and this man walks out with shopping bags, and I'm thinking this guy's going to screw up my picture... And I just think they're going to kill him. So I'm just waiting for the moment that the tanks going to run them over, they're going to shoot them. And I'm thinking about this and nothing's going on. And I'm wondering, 'Okay, they're showing a lot of restraint.'"

Widener snapped this photograph. The man — referred to now as "Tank Man" — ended up being whisked away by bystanders, unharmed.

But if you live in China, you can't access this photo. That's because in the decades since the protests, China's government has censored images — like Widener's photo — and any mention of that massacre while justifying the military crackdown of protesters.

Weiboscope, which tracks Chinese censorship, says about a thousand posts about the Tiananmen Square massacre on Weibo were censored between 2012 and 2018.

We spoke to Widener about that censorship and why his "Tank Man" image is still relevant today.

Anniversary Of Tiananmen Massacre Sheds Light On Censorship In China

Widener: "It represents everyone's struggle in life, whether it's with their job, or with their career, or their goals or dreams in life. It's very symbolic."

Widener says he saw violence from both sides.

Widener: "What I saw was a dead soldier who was killed by this mob. I saw another soldier surrender and the mob slowly moved in and started beating up on them with clubs and pipes and things like that."

Outside China, Widener's photo was published on the front pages of newspapers. It became a symbol of bravery, defiance and a reminder of the thousands of protesters killed. But getting the image out in the first place required creativity. To do that, Widener asked the help of an American student.

Widener: "He smuggled the film back to the AP office in his underwear. And that's how it was transmitted to the rest of the world."

While the photograph has circulated around the world, "Tank Man's" identity remains a mystery.

Widener: "This story is incredible. I mean, it is 30 years since this happened. No one knows who 'Tank Man' is. And in a way, he's like the Unknown Soldier. He represents all the fallen heroes."

Pompeo Calls Out China On Anniversary Of Tiananmen Square Massacre

But in China, the government wants to make sure this history is forgotten. School textbooks don't mention it. Even commemorating the event or mourning the death of a loved one is prohibited. Recently, camera company Leica released a commercial that depicts a photographer taking the photograph of the "Tank Man." The Chinese government reacted by banning the word "Leica" on all Weibo sites.

Widener: "I mean, that's almost juvenile. I mean, what? That's ridiculous. What do you hope to accomplish with that?"

Leica distanced itself from its commercial. The Chinese government's censorship shows just how polarizing the image still is today and how it can impact a company's bottom line. "Tank Man" is, in and of itself, a symbol of defiance. While he's celebrated in Taiwan and Hong Kong, Chinese social media users have defied their government in their own way by depicting the censored image using legos, cigarette boxes, or rubber duckies. Despite this creativity, those posts have also been censored.

As China continues to blot out the Tiananmen Square massacre, Widener says no level of censorship is going to erase the memory of what happened 30 years ago.

Widener: "I don't know, really what the Chinese government hopes to accomplish by continuing to pretend that this event in their world history never happened... I mean, they're not fooling anybody, it's not going to go away."