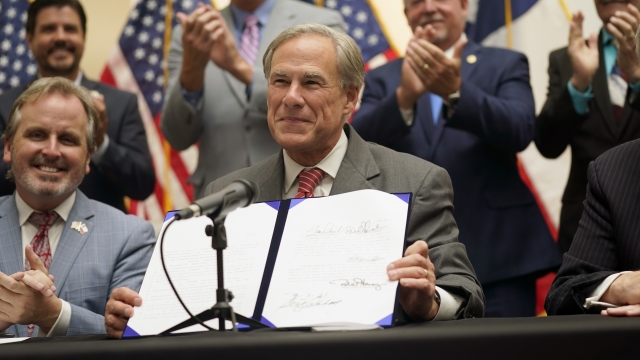 Gov. Abbott and other Republicans say the law expands access to voting, but it also puts new restrictions on 24-hour polling and drive-thru voting.

The bill signing underlined the hard right turn Texas Republicans made this year, including a new state law banning most abortions.

Already, the rewrite of Texas' voting laws are the target of at least three federal lawsuits — including another filed Tuesday — and all contend the changes will have a disproportionate impact on minorities.

Abbott and other Republicans say it expands access by increasing the minimum number of early voting hours, but the law also puts new restrictions on late-night voting.

“I feel extremely confident that when this law makes it through the litigation phase, it will be upheld," Abbott said. “Because exactly what we've said, it does make it easier for people to be able to go vote. No one who is eligible to vote will be denied the opportunity to vote.”

Texas is among at least 18 states that have enacted new voting restrictions since the 2020 election, according to the Brennan Center for Justice.

The laws are part of a national GOP campaign, including in Florida, Georgia and Arizona, to tighten voting laws in the name of security, partly driven by former President Donald Trump's false claims that the election was stolen.

Some changes squarely take aim at Harris County in the Houston area, where President Joe Biden carried the county of 1.6 million voters last year by a 13-point margin. Amid the COVID-19 pandemic last year, Harris County elections officials offered 24-hour polling places and drive-thru voting, which are now outlawed under the new law. The county also tried sending mail-in ballot applications to more than 2 million registered voters, but going forward in Texas, any elections officials who tries sending an application to someone who doesn't request one could face criminal charges.

In response to new voting restrictions in GOP-controlled statehouses, Democrats in Congress want to pass new federal voting rights protections at the federal level but have been unable to overcome opposition from Senate Republicans.