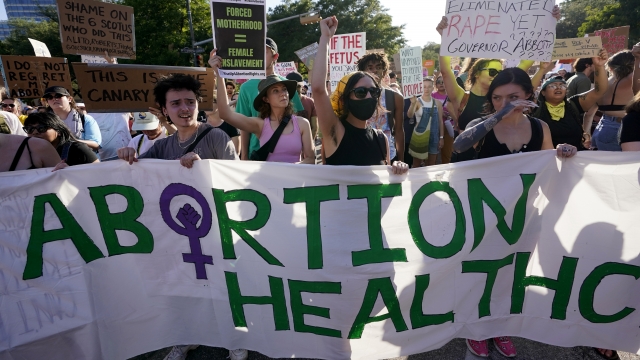 The lawsuit comes after the Biden administration told hospitals Monday that they "must" provide abortion services if the woman's life is at risk.

The state of Texas sued the federal government Thursday after the Biden administration said federal rules require hospitals to provide abortions if the procedure is necessary to save a woman's life, even in cases where state law mostly bans the procedure.

The lawsuit, which names the Department of Health and Human Services and Secretary Xavier Becerra among its defendants, says the guidance issued by the Biden administration earlier this week is unlawful, and that the Emergency Medical Treatment and Labor Act does not cover abortions.

"The Biden Administration seeks to transform every emergency room in the country into a walk-in abortion clinic," Texas Attorney General Ken Paxton said as he announced the lawsuit. He said the federal government isn't authorized to require emergency health care providers to perform abortions.

The legal wrangling is causing concern for doctors. Dr. Ghazaleh Moayedi, a Dallas-based OB/GYN and former abortion provider, said emergency departments may face these situations frequently — when patients experience miscarriages or ectopic pregnancies, or when a woman's water breaks before a fetus is viable.

"Physicians shouldn't be forced to call a lawyer, call an ethicist, call another lawyer, call a hospital administrator while a patient is actively dying," she said. "It is unconscionable."

The lawsuit comes after the Biden administration told hospitals on Monday that they "must" provide abortion services if the life of the woman is at risk, saying federal law on emergency treatment guidelines preempts state laws that have near total bans on the procedure, after the U.S. Supreme Court ruled that abortion is not a constitutional right.

In a letter to providers, the Department of Health and Human Services said medical facilities are required to determine whether a person seeking treatment may be in labor or whether they face an emergency health situation — or one that could develop into an emergency — and to provide treatment. The letter says if abortion is the necessary treatment to stabilize the patient, it must be done.

"When a state law prohibits abortion and does not include an exception for the life of the pregnant person — or draws the exception more narrowly than EMTALA's emergency medical condition definition — that state law is preempted," the letter said.

The department says its guidance doesn't reflect new policy, but reminds doctors and providers of existing obligations under EMTALA, which was adopted in 1986 and signed by President Ronald Reagan.

But Texas officials disagree, and are asking a judge to set aside the Biden administration's guidance and declare it unlawful.

The lawsuit says President Biden is "flagrantly disregarding" the legislative and democratic process, and that the guidance forces "hospitals and doctors to commit crimes and risk their licensure under Texas law."

The lawsuit said the EMTALA does not mandate, direct or suggest providing any specific treatment, and says nothing about abortion.

"On the contrary, EMTALA contemplates that an emergency medical condition is one that threatens the life of the unborn child," the lawsuit says. "It is obvious that abortion does not preserve the life or health of an unborn child."

The fall of Roe put in motion Texas' trigger law that will ban virtually all abortions in coming weeks. Clinics have tried to continue serving patients in the meantime, but court battles over whether a dormant 1925 abortion ban can be enforced for now has already stopped most doctors from performing abortions. Abortions soon will be allowed in Texas only when a woman's life is in danger or if she is at risk of "substantial impairment of a major bodily function."

The lawsuit says that doctors will be forced to chose between violating Texas law — which bans nearly all abortions — or jeopardizing their ability to receive Medicare funds. The lawsuit says the federal guidelines also conflict with the Hyde Amendment, which generally bars federal dollars from being used to fund abortions unless a pregnancy is the result of rape, incest or the woman's life is in danger.

White House Press Secretary Karine Jean-Pierre said this is an example of an "extreme and radical" Republican elected official. She added: "It is unthinkable that this public official would sue to block women from receiving life-saving care in emergency rooms, a right protected under U.S. law."