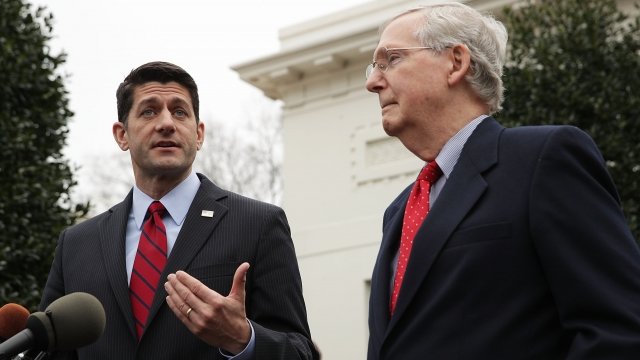 Leaders want to pass a "clean" debt ceiling increase, but GOP lawmakers aren't all on board.

GOP members have largely moved on from battling each other on health care for now, but there's another issue that is already causing some infighting: raising the debt ceiling.

The debt limit was established in 1917 while we raised money for World War I. It allowed the Treasury Department to borrow what it needed but set a limit on how much. That's continued, and we are spending more money than we're making in taxes. To make up that difference, the Treasury needs to borrow more and that limit has to be raised by Congress. Raising it allows the government to pay debts it already owes.

Congress used to do this easily — not anymore. Politico spoke with senior GOP sources who say congressional leaders are hoping to pass a "clean" debt ceiling increase — that's an increase without any kind of spending cuts attached to it.

The problem is, most Republican lawmakers don't want that. Many want there to be some kind of reform or cuts attached to an increase. That's from the House Freedom Caucus all the way to the moderate Tuesday Group. Montana Sen. Steve Daines put it this way: "If there's ever a good example of kicking the can down the road, it is continually raising the debt ceiling and not dealing with the cause of the debt."

Daines isn't alone. And many Republicans have run on promises to lower, not increase, the country's debt.

You've heard this fight before. The 2011 standoff between Republicans in Congress and President Obama led to a downgrade of the nation's credit rating, despite a deal actually being reached. That's not something congressional leaders are looking to emulate this time around, especially with the GOP holding all the levers of government.

With most of his conference signaling they are a no, House Speaker Paul Ryan may have to team up with Nancy Pelosi to get lots of Democrats to sign on. Which puts him in a precarious position that led to the ouster of Ryan's predecessor, John Boehner. In the Senate, Majority Leader Mitch McConnell should have a much easier time garnering support; senators tend to be more moderate.

But time is running out; Congress only has until Sept. 29 to come to an agreement to raise the limit. Otherwise, it could lead to huge consequences, including causing instability in the stock market or causing the country's creditworthiness to be downgraded.