Why Are Toys Ingrained In Our Culture? 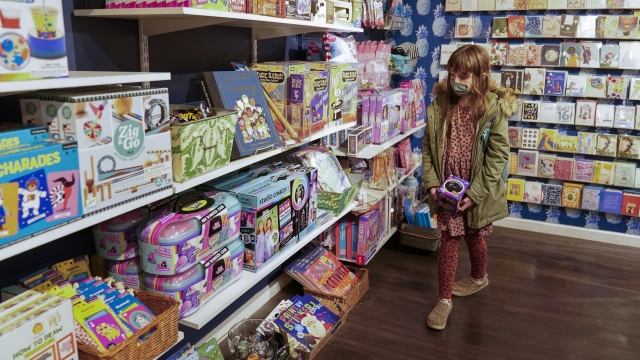 The history of toys in America goes way back in time and some industry experts say they're more than just what we see on store shelves.

For many, the holiday season means gift giving.

According to the American Retail Federation, the average American is set to spend more than $830 on gifts and other holiday items this year — with much of that being spent on toys. Toy spending topped $38 billion in the U.S. in 2021.

But toys are more than what we think of seeing on store shelves.

"Anything can be a toy," Karin Falkenberg of the Nuremberg Toy museum said. "A toy is the connection between an object and our fantasy."

James Zahn is the editor-in-chief of The Toy Book and he said that means everyday objects can be toys too.

"There's a lot of folks that believe a stick was probably the first toy out there," he said. "It could be a sword. It could be a bat. Who knows what kids were using it as?"

In 2008, the National Toy Hall of Fame inducted the stick into its hall of fame, calling it the "original building block for creative play."

Board games have been around for thousands of years, according to archaeological discoveries.

Kites may have kept kids entertained in China as far back as 1,000 BC, and there's evidence of dolls and figurines in ancient Greece.

Fast-forward to the 20th century and people began producing some of the more recognizable toys we know today.

In 1903, Crayola produced its first set of crayons. The Raggedy Ann doll made its debut in 1915. A year later, Lincoln Logs were invented. Soon after, Radio Flyer revolutionized how kids play.

But it was after World War II when the toy industry hit a new high.

The Push To Get Rid Of Gender-Targeted Marketing In Toys

Gender-targeted toy ads have ebbed and flowed throughout history, and now, companies are trying to stop the stereotypes.

"That was the product of rising economics, that people could afford toys for their kids," said Christopher Bensch, chief curator of The Strong National Museum of Play. "It was also the product of the baby boom that suddenly there's this giant market for toys in North America, for instance. So that helped promote things and there are toys that we think of from those years that were breakthroughs and remain present in the marketplace today."

Many products at this year's Sweet Suite were focused on enhancing children's cognitive skills.

A 2014 survey showed modern kids preferred to fill their time with screen devices over the likes of dolls and action figures. But even as our understanding of play evolves, traditional toys aren't going extinct.

"As much as I hear about adults and probably some kids who go to bed with their cell phones, that's not the same thing as a stuffed animal or teddy bear," Bensch said. "Toys really can bring out the best in all of us. Creativity, learning and socialization."