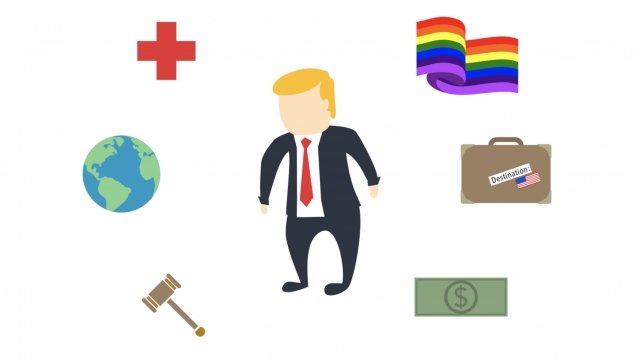 President Trump has promised to do a lot as president. And he's promised to do it really, really fast. But the first months of his presidency haven't yielded many results. It doesn't seem he's been able to make good on any of those big promises. And if you're not paying attention, that could be the end of the story.

But the Trump administration has undone a lot of what President Obama had touted as his accomplishments. It's actually a pretty long list, but here are some of the big ones.

There's almost nothing the president has hit more than Obamacare. Repealing it hasn't happened. But the Trump administration has slashed the budget for outreach efforts to get people to sign up for the program. For 2018, the budget is $10 million — down from $100 million this year.

Now to the economy. This is a long one, so bear with me. Withdrawing from the Trans-Pacific Partnership trade agreement, getting rid of a rule that would make more people eligible for overtime pay and even cut a rule that required large companies to release worker incomes by race and gender to try to close the wage gap. And that's not even close to everything.

For the climate, the big one here is obvious: pulling out of the Paris climate accord. But the administration also reversed a ban on oil drilling in the Arctic, blocked the clean power plan, cut a rule that would regulate fracking on public land and rescinded an executive order that forced government funded projects in flood-prone areas to consider rising sea levels.

Trump's immigration policies have gotten news coverage since Day 1. So far, the administration banned migrants and refugees from seven Muslim countries and cut the DACA program that protected children brought to the U.S. illegally from deportation.

During the election, the president promised to be a friend to the LGBTQ community. In office, he's announced a ban on transgender people serving in the military, ended the declaration of June as Pride Month and argued in court that the Civil Rights Act doesn't protect sexual orientation.

Trump Tweets His Opposition To Chain Migration â But What Is It?

In a tweet, President Donald Trump might have implied that he doesn't want DACA recipients to sponsor family members for immigration.

The president canceled the phasing out of for-profit prisons, got rid of an Obama effort to try to get rid of mandatory sentences and is allowing police departments to acquire military gear.

All of these promises kept (or even surprise moves) can be summed up into one big promise: reversing rules and policies all over the place. And that's likely not going anywhere.