The Weinstein Co. Has Had A Really Bad Week 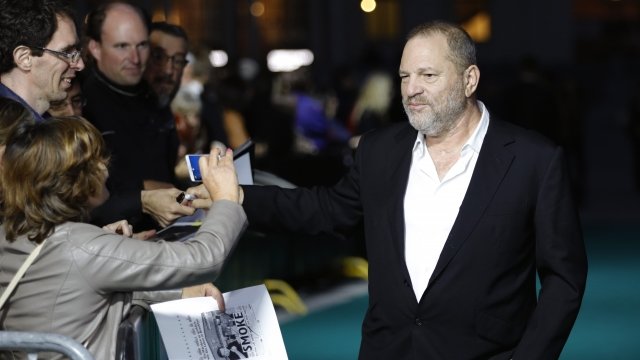 Colony Capitol is reportedly not going to provide an emergency cash infusion to the ailing company after agreeing to do so earlier in October.

The future of The Weinstein Co. is looking even more uncertain now that its financial lifeline has reportedly been pulled.

The New York Times says the private equity firm Colony Capital is not going to provide an emergency cash infusion to the ailing company after agreeing to do so earlier in October.

The Times reports the Thomas J. Barrack Jr.-run firm is still considering acquiring part or all of The Weinstein Co. But the publication says the company's assets are worth less than originally thought, so Colony believes bankruptcy is the likely outcome.

The Weinstein Co. was reported to be in significant debt prior to more than 50 women accusing the studio's co-founder Harvey Weinstein of sexual assault and harassment.

Weinstein was fired as co-chairman earlier in October. He resigned from the board after that, but he still owns a stake in the company.

Since the scandal was first reported earlier this month, The Weinstein Co. has been in a downward spiral.

Just this week, the New York attorney general's office announced it's investigating The Weinstein Co. for potential civil rights violations. And actress Dominique Huett sued the company, alleging Weinstein sexually assaulted her and that board members knew about his misconduct and ignored it.

On the film side of things, the production companies behind "Paddington 2" are reportedly looking to sever their North American distribution deal with The Weinstein Co. And the company's name and logo are reportedly being wiped from the upcoming home releases of "Leap!," "Tulip Fever" and "Wind River."

The Weinstein Co. still hasn't announced when in 2018 it'll release "The Current War." The film was originally scheduled to hit theaters Nov. 24 but was shelved because of the accusations.