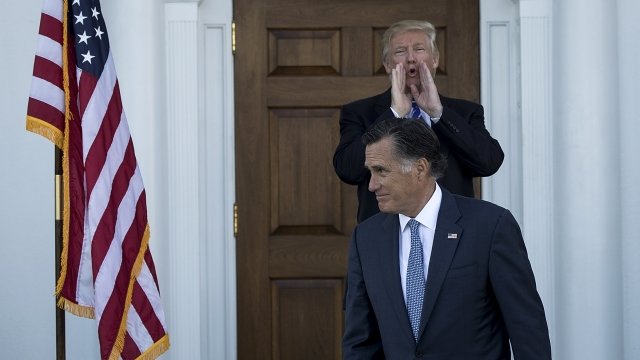 Romney's allies are sure the president is pushing for Sen. Orrin Hatch to stick around just to be vindictive.

If there's one thing we know about President Donald Trump, it's that he really knows how to hold a grudge. One of his most complicated beefs may keep Mitt Romney from the U.S. Senate.

The two-time presidential loser and former governor of Massachusetts has been making all the moves for a run next year. He's been meeting with donors, increasing his visibility in Utah and staying in the news overall.

There's also been speculation for months that Sen. Orrin Hatch, the longest-serving Republican in the Senate, is on the verge of retiring, which could make way for a Sen. Romney come next year.

But there's just one big problem: President Trump is pushing Hatch to stick around, and people in Romney's circle think it's to keep him out of the upper chamber.

It's pretty difficult to parse out whether the president is being vindictive or just making sure one of his strongest allies sticks around for as long as possible. Hatch has been with Trump since he was a candidate and has stayed loyal throughout the drama of the last year. Hatch is a trusted vote and a known entity — Romney might not be.

The president would have good reason to doubt how loyal a Sen. Romney would be. He was a strong voice in the "Never Trump" party during the election.

Trump seemed to patch things up with Romney later; the two met to discuss a possible secretary of state job during Trump's transition to the White House. But Romney has spent quite a bit of time since then calling the president out both behind closed doors and on social media.

Hatch has remained pretty mum about his decision so far, but with the election so close he can't be too far from making an announcement. And it seems the people of Utah would like to see Romney jump in the race. He has an approval rating of 71 percent in the state; Hatch hovers around 46 percent.