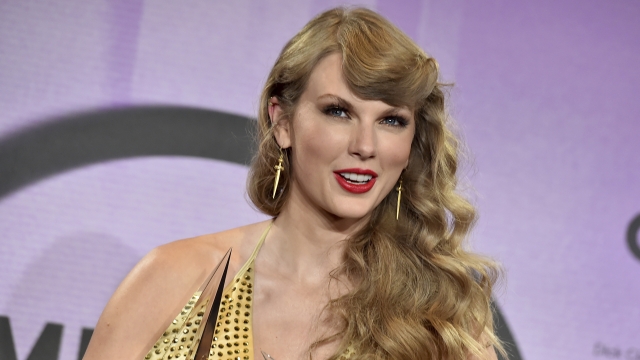 The kind of bots that snatched up so many Taylor Swift tickets are illegal, but a Scripps News investigation finds anti-bot laws are rarely enforced.

"I have shirts in here galore," said Smith, 21, during a tour of her closet where she pulls out a favorite shirt from Swift’s Reputation concert. "I bought this at the tour and I screamed."

Smith says Swift has always been much more than just a singer to her.

"I'm disabled, and so I was kind of teased mercilessly for it," Smith said. "You don't see me when it's 2:13 in the morning and I can't stop crying because I have all these memories coming back to me, and the only thing able to calm me down is 'Breathe' by Taylor Swift."

Ticketmaster sent special invite codes offering early access to tickets to verified fans, including Smith. She waited on the overloaded site for hours.

"My heart was racing all the time," she said. “I was like, am I going to get tickets?"

Smith knew she was in line along with millions of other “Swifties,” but she didn’t know an onslaught of computer bots was rapidly vacuuming up the tickets to resell them at secondary markets, typically at highly inflated prices.

The lack of action helps explain why bots are still a scourge. They drive up prices of concerts and sporting events in minutes, affecting venues of all sizes.

"Definitely the Taylor Swift thing was just an extreme example, but it's extremely pervasive," said Meredith DiMenna, director of programming for Analog, a small performance space at the Hutton Hotel in Nashville.

Bots were not supposed to still be a menace in Nashville, "Music City."

Tennessee has had a bot law on the books since 2008.

"That law prohibits the use of software that allows circumvention of ticket security protocols," said Jonathan Skrmetti, who became Tennessee’s attorney general in September. He said he does not know of any prosecutions using the law. "I'm not aware of any yet, but it's certainly something we're interested in," Skrmetti said.

Scripps News did not find any instances of the law being enforced in Tennessee.

Prosecutions against bot makers have been rare in other states, too. A 2021 investigative report from the state senate in New York, home of Broadway stages, found that policing bot activity "does not seem to be a pressing priority or is difficult to accomplish," and "the widespread usage of bots still remains largely unaddressed by law enforcement agencies."

Self-described bot makers are not hard to find, offering services in the open on the internet.

An old solicitation online seeking bids for "someone who can create a Bot for Ticketmaster" generated 11 responses, including some who appeared to provide headshots of themselves.

Many bot developers are overseas, a challenge for pursuing prosecutions, Skrmetti said.

"Part of it is, it's really resource intensive," he said. "There are ways of setting up various proxies that make it very difficult to find out who's doing the bot attacks."

Bots are a misdemeanor in Tennessee.

Skrmetti said law enforcement has tended to focus on crimes that are easier to investigate.

"What we look for is situations where we can make a difference and where there's a problem that presents itself that we can use our tools to solve," he said. "And so this is one that's gotten away for a while."

Bots have also slipped past federal efforts to stop them. Congress passed the Better Online Ticket Sales Act, known as the BOTS Act, in 2016. It gave new enforcement power to state attorneys general and to the Federal Trade Commission.

But in the six years since the BOTS Act became law, the FTC has announced just one enforcement case: the agency accused three scalpers in New York of using automated software to illegally buy tickets to Elton John and other popular events.

The FTC initially fined the scalpers $31 million but settled for $3.7 million, citing the defendants’ inability to pay. When asked about the lack of bot cases, an FTC spokesperson said the agency does not comment on investigatory decisions, adding, "we have taken down many illegal actors engaged in online commerce."

After the Taylor Swift presale meltdown, pressure is intensifying on the FTC and Ticketmaster to do more.

US senators on the Judiciary Subcommittee on Competition Policy, Antitrust, and Consumer Rights plan to hold a hearing on live event ticketing in the early part of this year on Capitol Hill.

The Justice Department is reportedly examining whether Ticketmaster's 2010 merger with Live Nation created a monopoly that harms customers and artists.

Skrmetti also is probing whether Ticketmaster-Live Nation has created a lack of competition in the industry.

"It's Whack-A-Mole," Glicken said. "As a new defense gets put up, people find a way around it. And we've yet to kind of find a ubiquitous solution."

There’s no easy fix in an industry as complex as live event ticketing, he said.

"It's very different than like, say, buying a T-shirt," he said.

Holly Smith waited on Ticketmaster’s site a grueling seven hours before she spotted one ticket to see Swift.

"That's almost a month's rent," Smith said. "I've had to really re-budget a lot of things. I've had people look at me like, like 'Holly, just sell the ticket.' I'm like, you don't understand. Like that is how much Taylor Swift means to me."

Smith is now part of a lawsuit filed by Swift fans against Live Nation. It accuses Ticketmaster of "allowing scalpers and bots access to the TaylorSwiftTix presale."

Neither Ticketmaster nor Live Nation representatives responded to our questions about efforts to fight bots.

A statement attributed to Ticketmaster in November said: "We’re working to shore up our tech for the new bar that has been set by demand for the Taylor Swift | The Eras Tour. Once we get through that, if there are any next steps, updates will be shared accordingly."