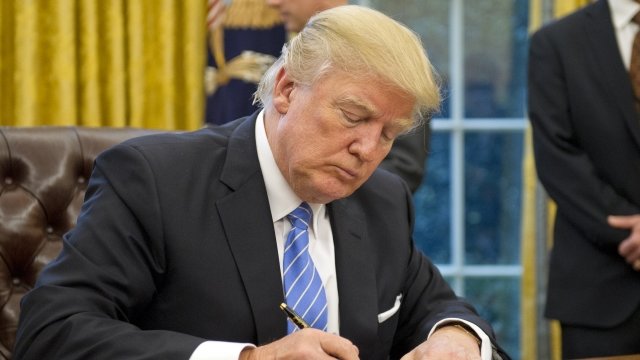 The Trans-Pacific Partnership was signed without the U.S. in March. Getting America back into the deal is easier said than done.

So far President Trump's flirtation with rejoining the Trans-Pacific Partnership trade deal is getting a lukewarm reaction from the pact's 11 member states.

Trump pulled out of the TPP at the start of his term but recently floated the idea of rejoining. A renegotiated deal without the U.S. was signed in March.

Setting up the trade deal took five years, and patching things up after the U.S.'s exit took one more year. The other nations are likely reluctant to upset all that work just to accommodate the U.S.

And the finished deal suspended several provisions the U.S. wanted on issues like pharmaceuticals and intellectual property. Other countries may balk if the U.S. wants to add those conditions back into the TPP.

The Anatomy Of A Trade War

Tariffs can be a double-edged sword for companies and farmers at home.

Trump has talked about rejoining the deal before, but only if the U.S. gets substantially better terms — which would take even more diplomatic wrangling to secure.

The difference this time is the White House has a reason to go back to the TPP table — China. Tighter trade links between the U.S. and other Asian nations could give Trump a better hand in the brewing trade fight with China.

And the U.S. still has plenty of economic pull to lure the TPP nations back to the table. According to the International Monetary Fund, America traded $1.5 trillion with the 11 TPP countries in 2017.