Trump Asks Navy Crowd To Call Congress About His Budget 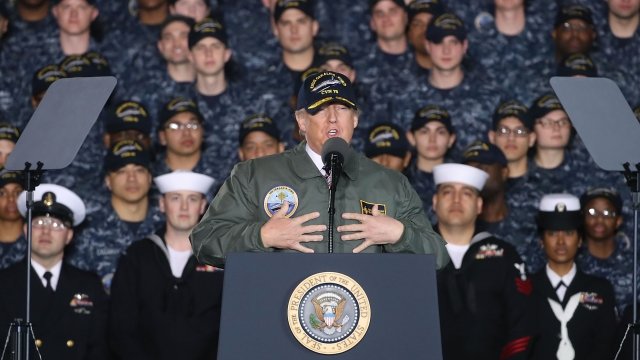 Trump touched on his budget and health care reform in a speech commissioning the USS Gerald R. Ford.

But he took a little time out to pitch his budget proposal — which includes a $54 billion increase in defense spending — to the military families and service members present.

"I don't mind getting a little hand, so call that congressman and call that senator and make sure you get it," Trump said.

And, while he was at it, he decided to make a bid for health care reform, too.

"And by the way, you can also call those senators to make sure you get health care," the president said.

Critics have claimed that, since Trump is commander in chief, his appeals could have sounded like orders to military men and women in the audience.

Congress' Military Budget Is Even Bigger Than Trump Asked For

The House version of the National Defense Authorization Act passed with strong bipartisan support. The Senate has yet to vote on the bill.

But while the setting for the appeal might be a bit unorthodox, it didn't seem to be an order.

Instead, it seems more reflective of a president whose agenda has been stymied multiple times.

Congress rarely passes a presidential budget untouched, and both sides of the aisle had issues with Trump's most recent proposal.

When it was first introduced, Republicans and Democrats were opposed to a lot of the cuts that the Trump administration was proposing. And the Congressional Budget Office's report on the proposed budget found that it would barely affect the deficit. The administration claims the budget would create a surplus by 2027.

And outside of the budget, Trump has had trouble fully implementing some his campaign promises for a number of reasons, including disagreements in Congress, court rulings and lawsuits.