Trump Didn't Hold Back Against North Korea During His UN Speech 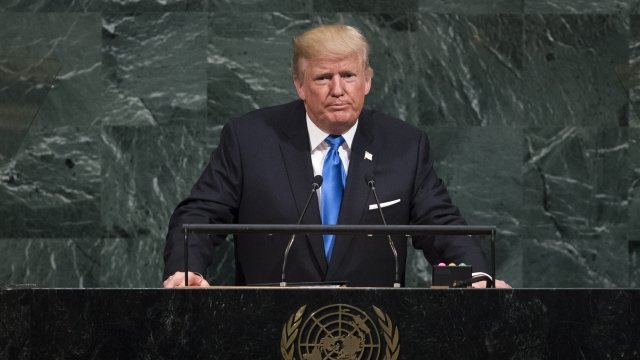 The president warned if the U.S. must defend itself or its allies, it will have "no choice but to totally destroy North Korea."

President Donald Trump spoke for the first time at the United Nations, and he didn't hold back against North Korea.

"No one has shown more contempt for other nations and for the well-being of their own people than the depraved regime in North Korea," Trump said.

The speech touched on several topics, but the commander in chief spent a lot of time condemning the Hermit Kingdom.

"The United States has great strength and patience, but if it is forced to defend itself or its allies, we will have no choice but to totally destroy North Korea," Trump said. "Rocket man is on a suicide mission for himself and for his regime."

North Korea has continued to develop its nuclear and missile programs despite sanctions and global condemnation.

Trump called the North's actions "twisted" and said no nation has an interest in North Korea strengthening its fire power.

Trump said, "It is time for North Korea to realize that the denuclearization is its only acceptable future."

The president also criticized the country for the death of Otto Warmbier, a U.S. college student who was detained there for more than a year.

Trump emphasized the U.S. is ready and willing for a military action but said he hopes it won't be necessary.

"It is time for all nations to work together to isolate the Kim regime until it ceases its hostile behavior," Trump said.