Trump To Senate GOP: Don't Leave Town Until Health Care Is Figured Out 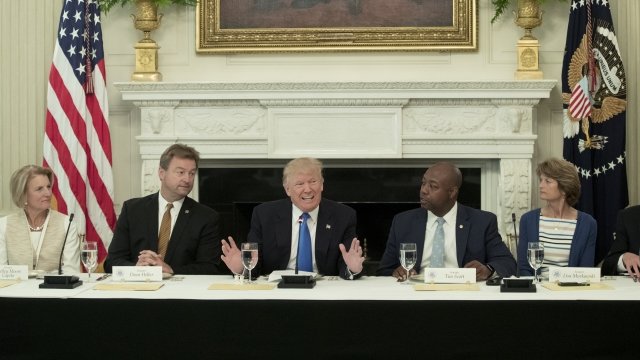 President Donald Trump held a luncheon for Republican senators at the White House on Wednesday. Health care reform was on the menu.

He said: "We can repeal but we should repeal and replace, and we shouldn't leave town until this is complete."

Trump aimed to put pressure on Senate Republicans during a working lunch with them Wednesday at the White House. The decision to hold the lunch came after the latest version of the Senate health care bill was effectively killed late Monday.

"The other night, I was very surprised when I heard a couple of my friends, my friends — they really were and are — they might not be very much longer," Trump said of Sens. Mike Lee and Jerry Moran, who announced Monday night they would vote no on a motion to proceed to consider the bill.

So far, Senate Republicans haven't been able to muster enough support to bring any of their various health care efforts to the Senate floor for debate.

Even with Vice President Mike Pence's tie-breaking vote, no more than two Republicans could oppose a measure.

The most recent example was on Tuesday. Senate Majority Leader Mitch McConnell announced late Monday that the Senate would take up a repeal of the Affordable Care Act and work on a replacement later. But less than 15 hours later, three GOP senators said they would vote no on a motion to proceed to consider a repeal-only bill. They want to make sure there is a replacement plan before repealing the Affordable Care Act.

"Any senator who votes against starting debate is really telling America that you're fine with Obamacare," Trump said.

Trump also called out Sen. Dean Heller, one of several senators skeptical of any efforts that would make cuts to Medicaid.

Heller represents Nevada, a state that expanded Medicaid under the Affordable Care Act.

"Look, he wants to remain a senator, doesn't he? And I think the people of your state, which I know very well, I think they're going to appreciate what you hopefully will do," Trump told Heller, who was sitting next to him at Wednesday's lunch.

McConnell told reporters: "There is a large majority in our conference that want to demonstrate to the American people that they intend to keep the commitment they made in four straight elections to repeal Obamacare. I think we all agree it's better to both repeal and replace, but we could have a vote on either. And if we end up voting on repeal only, it will be fully amendable on the Senate floor. And if it were to pass without any amendment at all, there's a two-year delay before it kicks in."

McConnell said they'll work with members "who have at least so far had some difficulty in getting to yes."

One Republican senator who didn't attend the luncheon was Senate intelligence committee Chairman Richard Burr. He told The Hill he'll "make it a habit" not to visit the White House while his committee is investigating Russian interference in the 2016 presidential election.