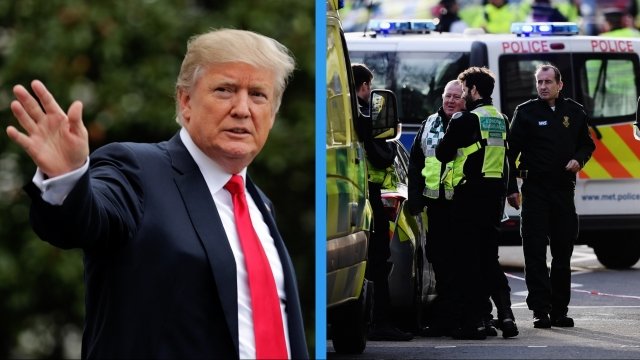 There was a 13 percent increase in police recorded crime in England and Wales, but that statistic goes beyond just terrorist incidents.

President Trump has a history of highlighting U.K. terrorism and crime on Twitter, but the tweets don't always show the whole picture.

On Friday, Trump tweeted out a quote that said "United Kingdom crime rises 13% annually amid spread of Radical Islamic terror." He seemed to associate that quote with a recently published crime report from the U.K.'s Office for National Statistics, but the statement may have actually been reported by the One America News Network — a pro-Trump network.

By itself, the statement is misleading.

For starters, though there was a 13 percent increase in police recorded crime, that statistic only covers England and Wales — not the entire United Kingdom.

The report also never specifically calls out "radical Islamic terror." A spokesman from the Office for National Statistics told The Washington Post the report "made no link between terrorism and violent crime."

The report does, however, note the impact of recent terrorist attacks in London and Manchester. Because of the multiple victims, the incidents did significantly increase the number of recorded homicides and attempted murder offenses between July 2016 and June 2017.

Trump's tweet was quickly condemned by U.K. politicians. Some argued the statement could incite hate crimes, which have increased in recent years.