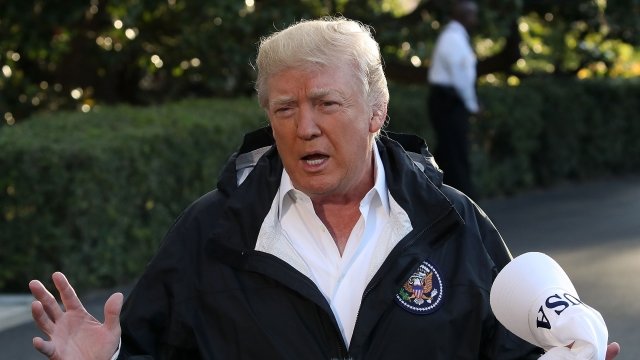 The commander in chief tweeted Friday about the island's "unmatched spirit" and said he would "always be with them."

That seems a pretty stark difference from comments Trump made Thursday. He tweeted, "We cannot Keep FEMA, the Military & the First Responders ... in P.R. forever!"

Some took that as a threat to cut off disaster relief to the island. The administration has already faced widespread criticism for its response to Hurricane Maria, which wreaked havoc on Puerto Rico when it made landfall Sept. 20.

But one message from the president's tweets remained unchanged. On both days, Trump pointed to the "disaster"-like state of Puerto Rico's infrastructure and economy before the storm damage.

The island is sitting on tens of billions of dollars of debt. The Puerto Rico Electric Power Authority, which has struggled with decaying infrastructure for years, effectively filed for bankruptcy in July.

Roughly three weeks after Maria made landfall, a majority of residents are still without power. Many are in need of food, water, fuel and other necessities.

The latest update from the Federal Emergency Management Agency says it's working on getting 20 million meals and 11 million liters of water to Puerto Rico.

FEMA has also approved over $200 million in aid to the island.