Trump On Sessions' Future As Attorney General: 'Time Will Tell' 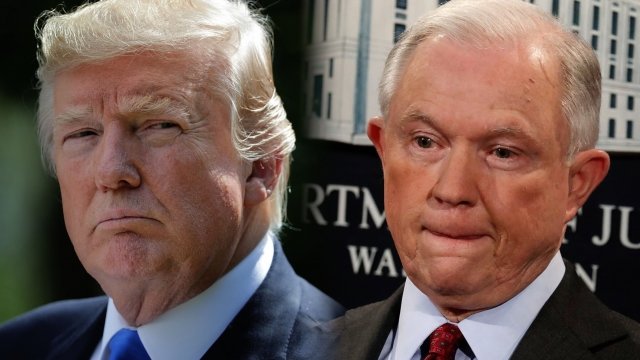 Early Tuesday, Trump criticized Sessions on Twitter for the second day in a row.

So reporters later asked Trump about Sessions' future during a joint press conference with the Lebanese prime minister.

Trump's response was pretty much the same as his comments to The New York Times in an interview last week. He reiterated his belief that Sessions shouldn't have recused himself from the investigation into Russian interference in the 2016 election.

That Times interview was the first time the president publicly expressed his disappointment in Sessions.

Prior to the press conference Tuesday, Trump sat down for an interview with The Wall Street Journal.

In it, Trump pushed back on criticism that he wasn't reciprocating Sessions' loyalty to him. Sessions was the first Republican senator to endorse Trump and remained a loyal supporter of his campaign.

Trump told the Journal: "It's not like a great loyal thing about the endorsement."