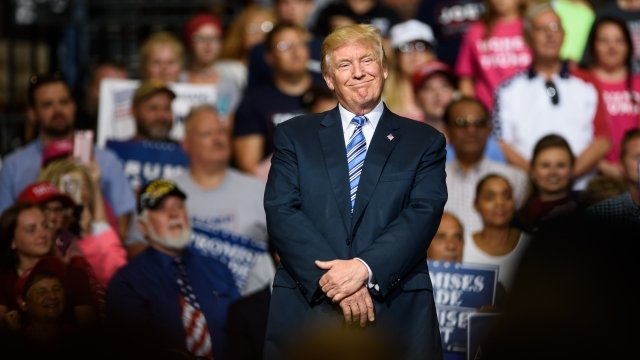 With more than 1,170 days until the 2020 presidential election, President Donald Trump released a new campaign video.

A full 1,178 days before the next presidential election in 2020, Donald J. Trump for President Inc. released a new campaign video.

"The President's enemies don't want him to succeed, but Americans are saying, 'Let President Trump do his job,'" the ad said.

Trump's campaign team says the 30-second ad will air on the internet and cable news shows.

The ad is the latest move Trump has made before his 2020 re-election campaign officially kicks off.

Although Trump has yet to formally announce his next run for office, he wasted no time by filing paperwork for re-election on Inauguration Day in January.

Prior to getting sworn in, he shared a possible 2020 campaign slogan during an interview with The Washington Post: "Keep America Great," with or without an exclamation point.

And as of August, Trump has made appearances at seven rallies across the U.S. — the first of which was held in Florida just 29 days into his presidency.

Why Do We Entertain The Idea Of Entertainers Running For Office?

One expert says celebrities pursue political office because we, the electorate, might have trust issues with the current system.

Trump is getting the re-election ball rolling extremely early compared with his recent predecessors. The five previous presidents waited at least two years to file their bids for re-election.

George H.W. Bush and Ronald Reagan cut things pretty close. Each waited until 12 months prior to the 1992 and 1984 elections, respectively, to file their paperwork to run for office again.