Why Do We Entertain The Idea Of Entertainers Running For Office? 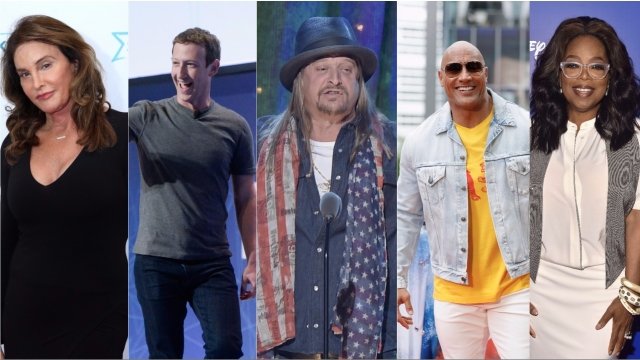 One expert says celebrities pursue political office because we, the electorate, might have trust issues with the current system.

You might call it "The Trump Effect," but some stars are getting serious about politicizing their popularity.

The latest celebrity to point to his political aspirations is Kid Rock. The performer even created a website to show what his run for Michigan's U.S. Senate seat could look like.

"Donald Trump got elected. So he can, too," voter Gary Wilson told WXYZ.

But why do we entertain the idea of entertainers running for office? And is this the new norm? Political guru Charles Lipson thinks so.

"Are we moving into a world where celebrity and politics are merging? The answer is yes. And they've been doing that for a while," Lipson explains. "But the way it used to merge was celebrities raised the money for their favorite politicians, and then Bill Clinton would let them sleep in the Lincoln Bedroom. Now, they say, 'Why can't I let other people sleep in the Lincoln Bedroom myself? After all, I was a pirate of the Caribbean.'"

Lipson teaches international politics at the University of Chicago, contributes to RealClearPolitics and writes on his blog, Zip Dialog. He says celebrities think political careers are much easier than they appear. But, he also thinks the mistrust within the electorate encourages outside candidates.

"I think it's more a comment on the fact that people who are highly elected officials in states are not highly regarded by the electorate based on their performance. And, I think that people don't trust the government, so outsiders get a particular edge under those circumstances," Lipson says.

Lipson says name recognition is the biggest advantage a celebrity has in a political race. The second is low expectations from the electorate.

"They can either seem like they're a lightweight, they don't know the policy issues. They may not be experienced in how to dodge a political question. Trump flipped that by saying, 'OK, I can't dodge, but I'll just go straight at it and say what most people would refuse to say.' And, of course, he tells many things that just aren't true. Things move on. He's managed, I think, to be the quintessential celebrity, but the question is, has he tarnished that brand?" Lipson asks.

Lipson mentioned an old line in Hollywood that claims once you've learned to fake sincerity, you've got it made. He says this phrase explains how hard it is to tell which celebrity candidates are for real and which are full of it. He also offered Kid Rock some advice.

Is Oprah Considering Running For President?

Oprah Winfrey says she never considered running for president, but the 2016 election seems to have changed her mind.

"Well, what I would say to someone is like Kid Rock is if you're really thinking of running, immerse yourself in public policy issues. He's gotta come up with something that makes him seem like a credible candidate instead of a pet rock. He can't just be a gadget that looks shiny for a week or two; he's got to be somebody, that if he were to win the nomination, he'd be able to give a real race," Lipson says.

Lipson says he appreciates the creativity and intelligence of all artists, entertainers and business moguls, but compared many celebrities to Fabergé eggs — a well-decorated shell with all the substance inside removed.

"We all remember Michael Jordan in Chicago. The greatest basketball player in all of Chicago and maybe everywhere. Not exactly the best baseball player and golfer. You know. Just remember that when Michael Douglas wants to be president," Lipson says, laughing.