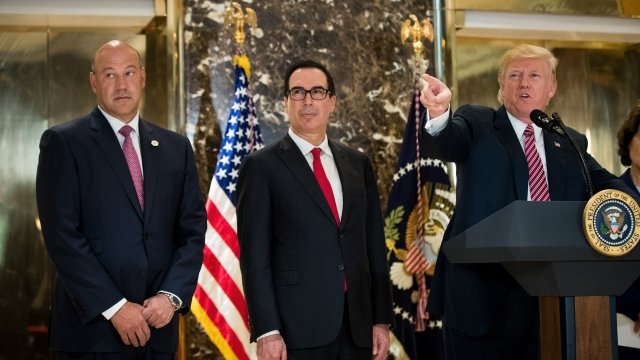 Two key players in the administration's tax reform effort are facing calls to resign in protest.

President Donald Trump's comments on the violence in Charlottesville, Virginia, have some worried about the future of tax reform.

Secretary of the Treasury Steven Mnuchin and top White House economic adviser and Director of the National Economic Council Gary Cohn both play major roles in the administration's effort to reform the tax code. But the two have some other things in common: Both are Jewish, and both reportedly expressed their distaste for the remarks Trump made at a Tuesday press conference where they were both front and center.

People close to Cohn and Mnuchin told reporters they both privately distanced themselves from Trump's comments. But they weren't willing to publicly break from Trump, something outside forces have lobbied both men to do.

"A number of people" reportedly called Cohn to suggest he resign from the Trump administration. And more than 300 former Yale classmates of Mnuchin have signed a petition urging him to "resign in protest of President Donald Trump's support of Nazism and white supremacy."

How Nazi Sympathizers Gained A Foothold In The US

Neo-Nazis have been in recent headlines, but a faction of U.S. citizens have embraced Nazism since the 1930s.

The Trump administration would likely struggle to pass tax reforms without Cohn or Mnuchin. Republicans have said they want to introduce a bill as early as next month.

All that said, reports indicate both Cohn and Mnuchin plan to stay on in their respective roles.

But previous White House shake-ups were preceded by similar reports, most recently with the departure of former White House chief strategist Steven Bannon.