President Trump Says It's Time To Work 'Constructively' With Russia 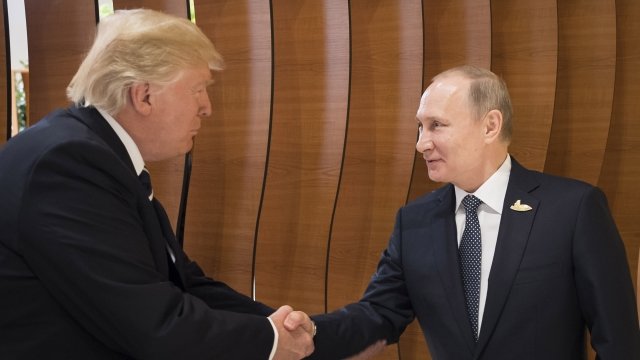 After days of conflicting reports, President Donald Trump gave his own account of what happened in his meeting with Russia's leader.

For days, there have been conflicting accounts of what happened in President Donald Trump's face-to-face meeting with Russian President Vladimir Putin.

Now Trump has given his own version of events, saying: "It is time to move forward in working constructively with Russia!"

According to Russian officials, Trump believed Putin when he said Russia's government had nothing to do with the election hacks.

On Sunday, Trump tweeted: "I strongly pressed President Putin twice about Russian meddling in our election. He vehemently denied it. I've already given my opinion."

That doesn't really clear up whether or not Trump believed Putin. But one day before the meeting, Trump said he thought Russia was behind the hacks, but that "other people in other countries" could have interfered as well.

The U.S., Jordan and Russia have agreed to implement a cease-fire in southern Syria starting July 9. Whether it will stick remains to be seen.

Trump also said he and Putin talked about creating an "impenetrable Cyber Security unit" to guard against future election hacks.

He also touted a ceasefire he negotiated with Putin in parts of Syria.

Trump said he did not discuss sanctions with Putin. But he did tweet: "Nothing will be done until the Ukrainian & Syrian problems are solved!"