Trump's Twitter Use Prompted A New Lawsuit Against Him 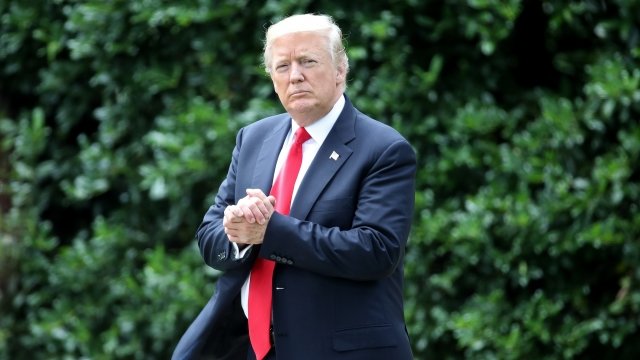 The lawsuit argues the @realDonaldTrump account is a public forum and that it's therefore unconstitutional to block users from seeing it.

President Donald Trump is being sued again. This time, it's by a group of Twitter users who've been blocked from his @realDonaldTrump account.

In a lawsuit filed Tuesday, the group argues that account is a public forum and that it's therefore unconstitutional for the president to block anyone from accessing his tweets.

The lawsuit says all seven individual plaintiffs were blocked from viewing Trump's Twitter feed after criticizing either the president or his policies.

The plaintiffs call the Twitter account "a kind of digital town hall." They allege their First Amendment right to free speech is being infringed upon because they can no longer view and reply to Trump's tweets.

Trump's director of social media Dan Scavino and White House press secretary Sean Spicer are also named in the lawsuit because the plaintiffs believe they have access to the @realDonaldTrump account.

Two watchdog groups have accused President Donald Trump and his office of violating federal law by destroying what they say are presidential records.

And the White House has previously said the president's Twitter feed is an official platform.

The lawsuit follows a letter to Trump from the Knight First Amendment Institute. It asked him to unblock users on behalf of two of the plaintiffs named in the lawsuit.

But the White House never responded. The plaintiffs are still asking to be unblocked and awarded attorney fees.