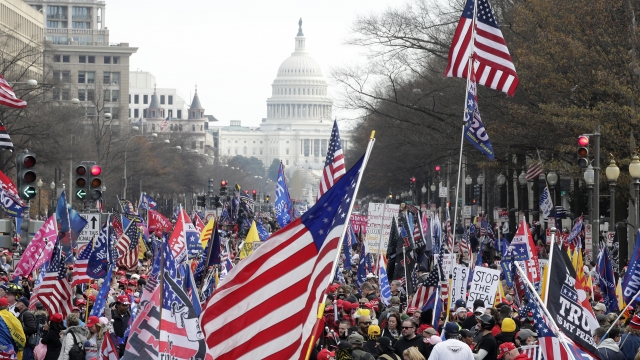 The demonstrators gathered just blocks away from the White House for a "Stop the Steal" rally, where they aired their grievances about the outcome of the 2020 presidential election and expressed support for the president's efforts to overturn his election loss just two days before the Electoral College will formalize Joe Biden's White House victory.

The demonstrators cheered as the president flew overhead on his way out of town to the Army-Navy football game in West Point, New York.

In time, the deep, deep corruption and the fraud that is being perpetrated on the United States of America through this previous election is outrageous," Flynn told a crowd of supporters Saturday. "It's outrageous."

The event featured hundreds of unmasked protesters who appeared to ignore social distancing guidelines as the city faces a surge in coronavirus cases.

D.C. residents have expressed concern that the large crowds of unmasked protesters could put the nation's capital at risk.

The D.C. Police department told Newsy that officers will not be enforcing the city's mandate that masks be worn outside or issuing fines to those who ignore social distancing guidelines.

Some counter protesters were also on site, and tensions between the two groups are expected to intensify by nightfall.