Trump Tries To Tighten The Rules For Central American Asylum-Seekers 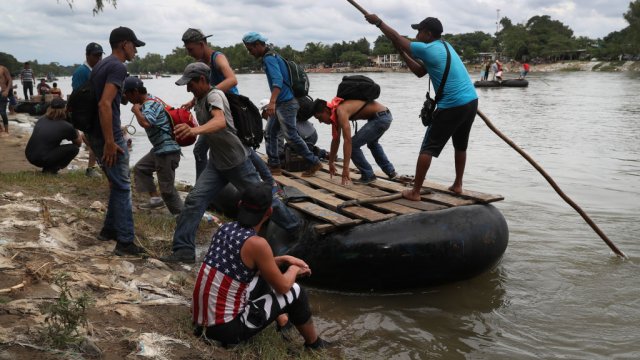 New policies from the Trump administration could keep Central American migrants who travel through Mexico from claiming asylum in the U.S.

For Central American migrants leaving their home countries, these simple rafts provide a key route across the border from Guatemala into Mexico. For many of them, that trip represents a step on the pathway toward the United States. But new policies from the Trump administration could keep anyone who makes this journey from claiming asylum in the U.S.

Right now, migrants traveling up through Central America can claim asylum in the U.S. as long as they make it across the country's southern border. People from four countries — Mexico, Honduras, El Salvador and Guatemala — made up just over half of the total asylum claims the U.S. recorded in 2017.

The White House is trying to change the rules so that asylum-seekers are required to apply in the first safe country they pass through before they can seek refuge in the U.S. That effectively cuts off the land route to asylum for many people from Central America.

President Trump has also signed an agreement with Guatemala, which has promised to accept asylum-seekers from Honduras and El Salvador that have traveled through the country on their way to the U.S. The president previously threatened to impose tariffs on Guatemala if the agreement wasn't signed.

Guatemala's president was set to meet with U.S. officials about the deal last week, but the country's high court barred him from signing it.

Despite the proposed changes to the asylum system, the U.S. is still the primary goal of those migrants making the journey north.

Mexican residents who live on the border argue their country can't qualify as a safe haven for asylum-seekers.

The White House's efforts to alter U.S. asylum policy are currently being blocked by a court ruling. And the Trump administration's agreement with Guatemala could face the same fate: The country's supreme court has ruled such agreements must be approved by Guatemala's legislature before it can take effect.